by Stephanie Vierow-Fields, Education Coordinator at the Space Science Institute

As we gear up for the Universe of Stories summer learning event and NASA’s Apollo 11 50th anniversary, NASA@ My Library and the Northwest Earth and Space Science Pipeline are collaborating to promote a unique engineering challenge from the University of Washington in Seattle, WA, offering students the chance to land on the “Moon”.  Well, a map of the Moon at least. 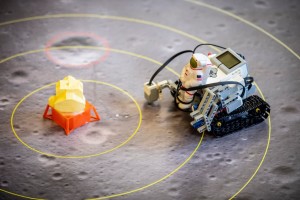 A Lego Mindstorms robot, with a plastic astronaut strapped to the front, approaches the lunar lander. Credit: Dennis Wise/University of Washington

With the advent of new and exciting technologies for students to utilize, the ANGLeS (Apollo Next Giant Leap Student Challenge) plan to incorporate 21st century technologies as the students try to replicate the successful Apollo 11 Moon landing in 1969. The use of a drone, programmable rover, and coding create a fun atmosphere for learning about the engineering design process, and the importance of creative thinking and collaboration, all without ever leaving their hometown.

“An important aspect of the project is to provide access to NASA science and technology for many of the underserved and underrepresented communities across the U.S.,” said Robert Winglee, director of the Northwest Earth and Space Sciences Pipeline and a UW professor of Earth and space sciences.

A flying drone carries a lunar lander above a map of the moon’s surface. The landing spot is the actual site of the Apollo 11 landing. Credit: Dennis Wise/University of Washington

Teams of students from fifth to 12th grades are invited to participate. Each team will build a replica of the lunar lander and use a remote-controlled drone to land it on an 8-by-12-foot map of the Moon’s surface. Students will modify and program a Lego Mindstorms EV3 robot to then explore the lunar surface and bring back a rock sample.

This challenge provides a great opportunity for libraries and schools to work together with each other through similar NASA funded programs!

The Northwest challenge will be held in July in Seattle and is open to teams from schools or recognized informal education programs in Washington. Twelve other NASA regional hubs will also host events the week of July 15-20. The winning team from each location will win a trip in early August to visit NASA’s Johnson Space Center in Houston.

More information can be found at https://nwessp.org/apollo50/.

We will be promoting this and other activities on our Summer of Space webpage.  Check it out and register so you stay up to date on all the exciting opportunities the summer of space will bring.

Drone and rover footage taken at the Universe of Stories Planning workshop at the Seattle Public Library.  Drone operated by Deana Brown from the Idaho State Library.