Lessons Learned from a Pandemic

Lessons Learned from a Pandemic

As was the case around the country, the COVID-19 global pandemic struck hard in West Virginia.  Not necessarily in the number of cases or number of lives lost, in comparison to other areas of the United States, but in terms of other factors.  These include the closing of schools, churches, businesses, and yes, public libraries.  The economic devastation in a state that was already struggling is staggering.  Add in other factors such as the ongoing opioid crisis, the loss of population as people move out of the state they love, and West Virginia’s dubious distinction of nearing the top of the list in the nation in states where grandparents are raising grandchildren, and the present day, let alone the future, seems bleak.

And yet, like the joy and hope provided to us by NASA’s successful landing of the Mars Rover Perseverance on February 18, 2021, my colleagues at the Kanawha County Public Library daily find joy in the services we provide to our community. One of the ways we were able to do this in this strange pandemic year was through a grant collaboration with the STAR Library Network.

Having previously collaborated on the Project BUILD STEM program, we were excited when contacted by our STAR Net colleagues in the fall of 2020 offering to chat about possible collaborations.

How were things in West Virginia, they asked? How are you?

How are things at your library?  Is there anything we can do to help? 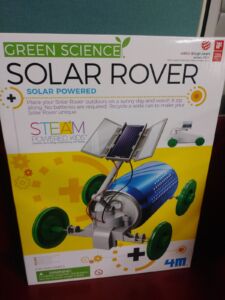 We shared that our budget had been reduced due to anticipated shortfalls in county tax revenues.  Coupled with the fact that we were only offering virtual programs, not in person programming, we were really missing the children and families who visit us.  A bright spot though were the popularity of the Make & Take craft and activity kits that we created for our patrons.

From this initial conversation grew the idea of a grant for STEM Kits to give to our young patrons.  Our first thought was that library staff could make and assemble STEM kits to distribute throughout our library system  However, in December of 2020, our library staff was split into teams due to COVID.  If a coworker were diagnosed with COVID, the team they were assigned would quarantine, allowing the other team to work in their place.  Library staff was already working alternate days at home and in the office so the team structure, while necessary, was very limiting.

With this in mind, an ad hoc team of our Kids Connection team (a long-standing group of library staff members who work directly with our children and families) decided that the best approach for this grant was to purchase STEM kits that were already assembled.  We knew that we wanted to focus on engineering and on the upcoming Mars Rover landing.

We found so many wonderful kits from which to choose.  After much debate, we selected four items for purchase – 150 each of a Green Science Solar Rover kit & a Solar Powered Hybrid Rover Robot Kit; 300 DIY Light Wand kits, and 300 Woodshop Build and Play Project Kits.  The purchase requisitions were completed, the orders were placed, and we quickly received the Light Wand Kits and the Woodshop kits. We waited, and we waited, and finally inquired as to the Solar Rover kits.  We learned that even though we had ordered from a known national vendor, they were unable or unwilling to provide a bulk order to us.

More delays until we were able to order and receive 300 Solar Rover kits from Amazon.  Because of the delay, we missed being able to distribute these STEM kits in February to coincide with the landing of Perseverance on Mars.  We shifted our target to begin distribution of the kits in April in celebration of the anticipated flight of the helicopter Ingenuity on Mars and the fact that April is Citizen Science Month.  And for three glorious weeks in April, we distributed our STEM kits to excited families who were thrilled to discover that they could keep the kits while indulging in a love of science. 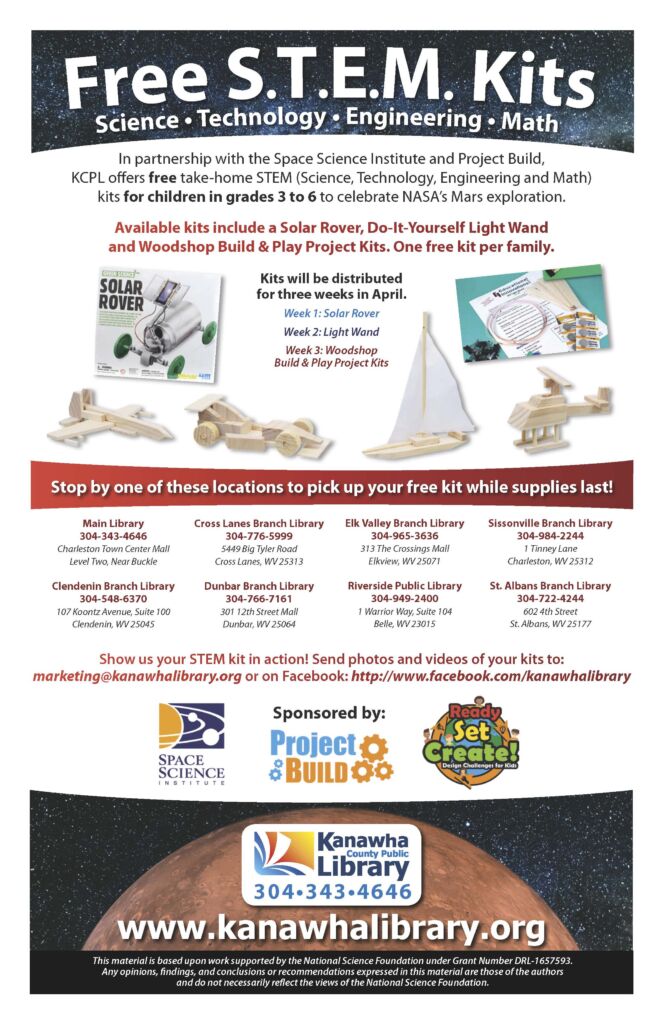 While we could never compare ourselves to the teams of NASA employees who created the amazing landing of Perseverance and the flight of Ingenuity, we can take hope that in our distribution of STEM kits to children in West Virginia, we just might be providing the spark for the next generation of NASA explorers.

Interested in learning more about free Project BUILD resources? Head over to the Project BUILD Resources Page and Engineering Program Toolkit for tools, activities, and more to help you facilitate engineering programs at your library.