Within the city limits of Erlanger, where my library branch is located, is Doe Run Lake which is a Kenton County 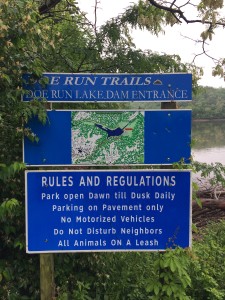 park. The City, the Parks, and the Library have worked together on a number of events, but this was a first for us; and it took two tries. The hike at Doe Run was originally scheduled to take place last November. The plan was to start from another Erlanger city park, Flagship Park, and walk through in the Duke Energy right-of-way which connects Flagship to one end of Doe Run. We held registration for the event and since we had no idea how many people were likely to be involved, were very happy when we had 60+ register. Unfortunately, threatening weather required that we cancel the event at the last minute. At the time of the cancellation, the consensus was for most of those who were registered that they would like to be notified if we were to plan to try again.

So try again, we did. This time we planned for the spring. While we were working out details, we discovered that 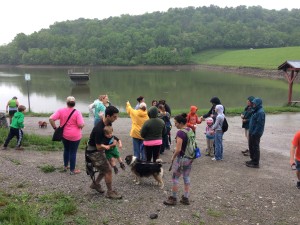 Duke planned to do work in the right-of-way between the two locations about the same time we were planning the hike. This changed the plans again, and instead we decided to start and end at the dam which created Doe Run Lake. There is a parking lot and a couple of soccer fields there, with flat space in which we could hold a lunch following the hike and display area for local outdoor organizations to set up booths. We contacted several organizations, with the idea of an “outdoor resource fair” at the end of the hike while participants enjoyed lunch. Plans again went somewhat awry; several organizations which had planned to 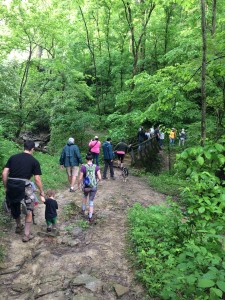 participate had to back out, and the day of the event, it was rainy. There had been rain during the week, and things were muddy. We were unsure how many of our 50+ registrants would show up, but we planned to hike anyway.

Surprisingly, we had nearly 35 people attend the hike, even though we started in light rain, faced mud, and only had three organizations able to attend with 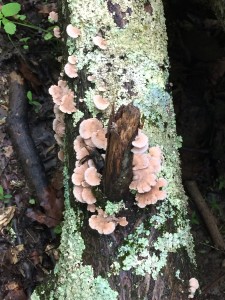 information booths. And it was a great day! We had participants ranging in age from 3 to somewhere past 70, plus a dog. We had veteran hikers, relative newbies, and several who were new to that particular park. We even had one participant who was training for hiking the Grand Canyon later this summer. Our naturalist who was to lead the hike was one of those who couldn’t make it, so we lead the hike ourselves. The Kenton County Parks and Rec manager provided a lot of information about the lake itself, the surrounding area, and some of the things we saw on the trail. I helped by pointing out plants and a few animals along the way. We saw crayfish in the creek, snails, ferns, mushrooms, a wide variety of trees and

flowering plants, mosses, lichens, birds, and more. I came prepared with field guides which participants were free to borrow for the duration of the hike. We hiked for roughly 45 minutes around the lake, then turned around and headed back to the parking lot. There is trail all the way around the lake, but some of the trail would have been very difficult going because of the rain earlier in the week. Out and back also made sure we would return to the parking area in time for lunch, which was being supplied by the City.

In the end, we all agreed we would like to partner on a similar event in the future. We reached some people we might not otherwise be reaching, offered something new and exciting for people already familiar with the library, and helped introduce people in the community to some of the resources they may not have been aware of previously. And we got to spend a great day out of the office!