As it often does in the Midwest, the fall began in all its resplendence – sun shining through the foliage, colors ch 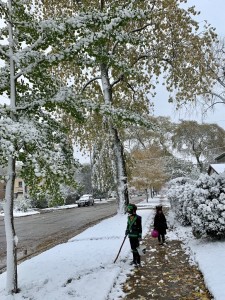 anging majestically, a cozy crispness in the air. And then it snowed. A lot. And it stuck, leaving us incongruously with deep snow and trees full of not-quite-changed leaves. It was amazing to look at, a reminder that wonder exists in the unexpected. My kids and I spent Halloween afternoon tromping down streets arched with heavy snow-dr enched branches, dodging puddles, and throwing snowballs. I was marveling at the spectacle, when it occurred to me that every year I look forward to this season, and I know nothing about why these changes happen. What better opportunity to explore this phenomenon, then STEAM Engines, Skokie Library’s kindergarten through second grade science club?

The Mamas and the Papas 1965 hit California Dreamin’ welcomed the kids as they shuffled in and introduced themselves. I had displayed a number of both fiction and nonfiction books about fall throughout the room, and had a picture of a branch, mid-autumn transition, as well as the pressing question: “What did one leaf say to the other?*” up on the screen. They spent a lot of time guessing – none of them correct. They did, however, correctly surmise that we would be talking about leaves. This brought us to our read-aloud: Little Tree, by Loren Long, a sweet parable about change and growth. 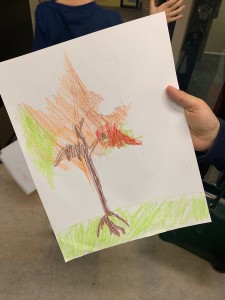 From there, we learned about two different types of trees: Deciduous (leaves have many different shapes, they fall in autumn), and Coniferous AKA Evergreen (have needles rather than leaves, MOST keep their needles year-round). Once we felt comfortable with these differences, I asked them why they thought coniferous trees shed their leaves. There were a lot of guesses: “they don’t need them anymore,” “ so new ones can grow!” but I wanted to dig a little bit deeper. To mix things up a little, we watched SciShow Kids short: Why Do Leaves Change Colors in Fall?

Video over, I showed them a spectrum of leaf colors, explaining that all leaveshave pigments in them: red,  green, yellow, and purple,all at the same time, all of the time

. Then I introduced them to the big green: CHLOROPHYLL. The roughest, toughest (most useful), pigment in a leaf! Because chlorophyll helps absorb sunlight and convert it to energy (big shout out to photosynthesis!), it overshadows all the other pigments. Hence, during prime growing seasons, the leaves are green! To further emphasize this point, I used the Incredible Hulk as an example of a big green entity that does a lot of heavy lifting. “Hulk SMASH sunlight and water into energy source for plaaaaants!!” One kid in particular was particularly intrigued by my use of the big green superhero, and I can only hope that (like myself) for him, all future knowledge of photosynthesis will be inextricably linked to the Incredible Hulk.

Asthe days get shorter, a chemical in the trees signals that chlorophyll is not as useful (not as We watched a time-lapse video of leaves changing color in Ann Arbor, which we all agreed was very cool, but no one had a good answer for why trees lose their leaves (Exce 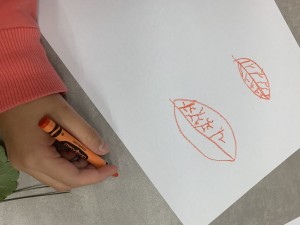 pt for me. I totally did). Ultimately, they do it because they have to! Photosynthesis requires a lot of water, and water tends to be scarce in the winter. Once the cool weather starts rolling in, trees essentially push the leaves off in order to conserve energy. It’s self preservation! 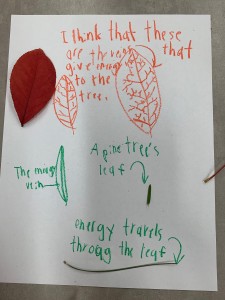 niferous and deciduous foliage, and the kids guessed which was which. They did a good job, and riding the high of knowledge gained, we marched over to the art room to keep the good times rolling. I supplied a box of leaves of all shapes and sizes, in various forms of transition, and let the kids loose with paper, crayons, and markers. I showed them how to do a leaf rubbing, and encouraged them to really investigate the leaves. How do they work? Does shape matter? As always, I was blown away by their creativity. Some made careful and deliberate rubbings. One used the leaf to create negative space, and one girl spent a very long time examining leaves and making notes in what appears to be the beginnings of an excellent nature journal.

I was worried that this activity lacked some razzle-dazzle, and the kids may not buy in, but it ended up being one of the more successful projects we’ve done. They really dug in, and were thoughtful about the differences in the leaves. Several stayed well after the program’s end to finish their work. This was a really satisfying program, both for me and the participants. It was a great way to get the kids thinking about nature – how it works, and how magical it can be. I encourage you to try it, and let me know how it turns out!

*I’m FALLing for you.