There is going to be a special event this coming Monday.  The planet Mercury will be passing between the Sun and the Earth.  It’s called a Mercury Transit, and it is a rare occurrence.  The next time such an event will be visible from the United States will be 2049.  There will be one in 2032 and another in 2039, but they won’t be visible to anyone in North America.

A Mercury Transit is when the planet Mercury passes between the Earth and the Sun.  Unlike an eclipse, which is visible to the human eye, anyone who wants to watch the event Monday will need special equipment in order to see the tiny planet passing across the Sun’s disk.  Looking directly at the Sun will damage human eyes, and can cause blindness.  Besides that, Mercury is so tiny and far away that even if a person could look at the sun, Mercury will be such a small dot against the surface of the Sun that it wouldn’t be visible.  A solar telescope or binoculars with a sun filter/lens will be needed this Monday.

Here is a map of the areas where the Mercury Transit will be visible: 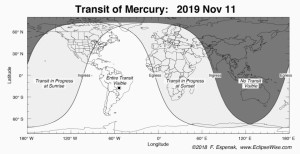 Here is a video for kids, explaining what a transit is:

The last Mercury Transit was in 2016.  Below is a video of that transit recorded by the Slooh Observatory in the Canary Islands.  It is over 8 hours long.  Did I mention that Mercury is really tiny, in planetary terms, and the Sun is comparatively quite large?