Since this is my first blog post, I should introduce myself. My name is Christina, and I work in a public library in a Chicago suburb in Illinois. I have always worked with kids, but have changed titles a few times. I am currently working in the newly-created Youth Technology Librarian position. Until recently, I was the Middle School Librarian whose interest in technology led me to spearhead most of the technological endeavors of the department.  Now, I get to actually play with the things I recommend we buy, and teach it to kids of all ages, as well as the staff in our department. 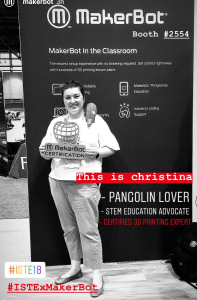 With this new position came a new conference opportunity. I’ve wanted to go to the ISTE conference for a few years, but it being out of state, and always coinciding with ALA’s annual conference, and not technically part of my job description got in the way of me going. Now, with technology a part of my title, and it not requiring a hotel booking, I made my case, and was approved to go to the International Society for Technology Education annual conference in Chicago.

I learned so many things over the three days that I attended the conference. My mission was to learn as much as I could about AR/VR for education in a way I could implement into a public library setting. With my proposal to my director next week, I can say that I left ISTE way more prepared and knowledgeable in virtual and augmented reality. ISTE was not my first large conference, but it was definitely the largest I’ve ever been to.  I was the only public librarian I came across at the conference, and there were significant differences between ISTE and ALA’s annual conference.

I couldn’t believe it, but the Starbucks line at McCormick Place was longer at ISTE than ALAAC. I never thought I’d see the day. If you wanted a delicious Starbucks beverage to get you through the 2 pm session, you should budget around 30 minutes – at least.

There were so many choices for BYOD (Bring Your Own Device) sessions, and while registering, I discovered you’re only allowed to register for one a day. I was super bummed when I learned about this, but I should have taken it as foreshadowing for what’s to come. It is SO crowded there! At other conferences, you can schedule back-to-back sessions and mosey into the the next one once the first once is done. At ISTE, people were waiting in line or finding their seat 30 minutes before the session started. It didn’t seem uncommon to attend a session simply because you wanted to attend the program offered in the same room immediately after. There are so many things ISTE has to offer, but you really have to streamline your options before you walk in the door.

People are SUPER nice there. I went to a networking group social alone, and the organizer (nicely) called me out for sitting alone, and made me move to a table with people. I met so many people with different professional backgrounds, and never felt so welcome in a setting I normally find slightly alienating.

Ribbons. Ribbons everywhere. Don’t get me wrong, ALA’s ribbon game is strong. I don’t think I saw the “tired feet” ribbon at ISTE. I’ve seen plenty of long ribbon tails, but this is the current record holder: 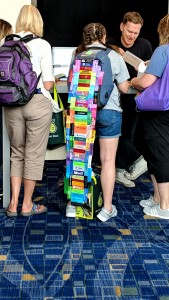 I felt super important in the exhibitor hall when I had to sign an NDA for a new Sphero product reveal. (I asked, I am able to say that it exists. That’s it. ) I did miss the onslaught of free/signed books at ALAAC’s exhibits. Librarians got the swag! I did get one book signed. Northern Illinois’ STEMRead hosted an awesome after-hours event with Andy Weir with cute educational crafts, Beat Saber, and an “Artemis” themed escape room. (We totally lost.) 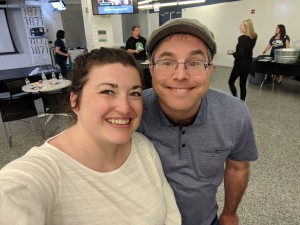 The exhibitors were fun, and the sessions were great, but for me, the posters and playgrounds were where it’s at. Be sure to plan plenty of time around these two parts of the conference. I didn’t not initially realize that the playgrounds change presenters within the playground time slot, so be prepared! The playgrounds and posters offer hands on experience with a personal feel. You talk to people that have been in your shoes and have tried out what they’re pitching. The best were the young children from different countries showing off the projects they created. Besides the adorable factor, their projects were awesome and I totally learned from them.

After the end of the third twelve hour day, and the third day of falling asleep on the train home, my brain and notes were packed with innovative ideas that I could immediately implement in our library, and more to aspire to in the near future. I have already started taking 360 pictures of our library for Google Maps. This year’s conference has definitely armed me with plenty of ideas to make a big splash as the newly appointed Youth Technology Librarian. (Don’t worry, I will post all my awesome ideas as I try them out!) I don’t know if I will be able to go to the ISTE conference next year. Would my second year be as amazing? I don’t even know. More importantly, can I still get the #tiredfeet ribbon?