Providing programs that fit in the Engineering aspect of STEAM can seem a bit daunting. The American Heritage Dictionary of the English Language, Fifth Edition (c.2011) defines engineering as:

“The application of scientific and mathematical principles to practical ends such as the design, manufacture, and operation of efficient and economical structures, machines, processes, and systems.”

Does that mean that in order to have an engineering program, one must teach, explain, or even fully understand those scientific and mathematical principles? Not necessarily, and that is the beauty of non-formal programming! For many, the trial and error method helps to understand the basics of those principles and processes better than formal instruction. 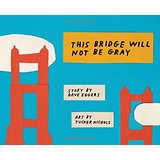 The Kenton County Public Library (KY) recently held a “Building Bridges” program. The program was designed for ages 6-12, but family members of varying ages were also included. Parents, Grandparents and younger and older siblings chose to remain in the room for the program as well. As with most library programs, we began with sharing some stories and non-fiction related to building and bridges. A notable title (and one which both kids and adults enjoyed immensely!) is This Bridge Will Not Be Gray, by Dave Eggers, illustrated by Tucker Nichols.

The book tells the true story of the building of the Golden Gate Bridge, and how it came to be bright orange. It touches on the design portion of the building process, the mechanics of building it, and the aesthetics of such a large structure being in a beautiful natural place. The story is told in conversational, easy-to-understand language, and the illustrations for the book are done in cut paper and are very engaging. Even those who might not think they are interested in the story of the Golden Gate Bridge find this story intriguing. It is also laugh-out-loud funny in some parts!

Once we had finished the reading, it was time to begin our building. A variety of materials were made available to the participants- paper tubes, chenille stems, card stock paper, empty plastic bottles, clothespins, craft sticks, rulers, and our stock of Keva Planks http://www.kevaplanks.com/ which are identical smooth wood planks measuring approximately 4.5 x 1 x .25 inches. Rubber bands and scotch tape were provided as well. Before beginning, the rules for building were explained as follows: 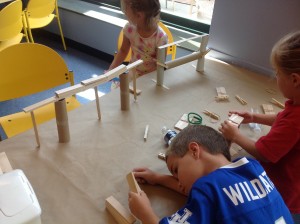 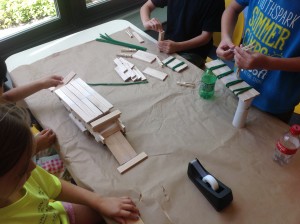 As is evident in the photos, not only the kids found this to be an engaging and stimulating program! There were many and varying designs for bridges, much discussion, and a lot of trial-and-error. Everyone was very involved and in many cases independently tested the stability and strength of their designs by having them hold objects or by seeing if they stood up to wind (blowing on them) or vibration (intentionally bumping the table.) None of these tests were suggested as part of the oversight of the program, but were enthusiastically applauded upon notice. After the program, all pitched in to demolish their creations, right down to peeling tape off the planks before returning them to the bin! 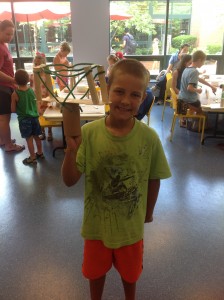 At separate programs in which the “project” was open building with the Keva Planks, those who attended were given only one rule: help clean up when the program ended. They enjoyed the time to create structures of their own design with the planks, and designed and built a variety of things. Trial-and-error was part of these programs as well, and an impressive set of structures using differing building techniques was created. The principals of design were also tested in the demolition of the tallest of the structures 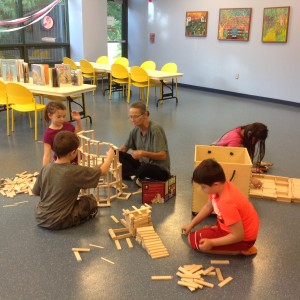 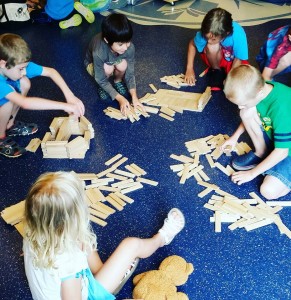 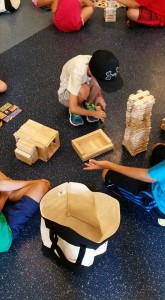 While similar programs can be offered using such building materials as Legos or other brick-like blocks, the identical nature of the Keva 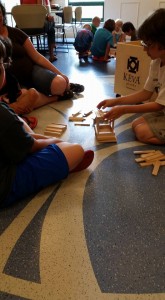 Planks and the smooth, non-interlocking design are conducive to working through some of the principles and mechanics of building. Interlocking bricks are much easier, in some ways, to build large, impressive structures with; but they also require potentially less imagination and mechanical understanding in terms of the soundness of the structure. And the Keva Planks make a much more pleasant sound when structures collapse as well! Other types of non-interlocking blocks would work well for this type of event, including traditional wooden blocks, cardboard boxes, or other non-interlocking building materials. For those wishing a more natural approach, these are an intriguing option for many reasons. 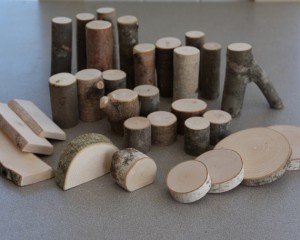