Transportation at the Depot

Taking the STEAM concept in a slightly different direction, last week we hosted a program at the Depot Park all about transportation. This is always a popular theme, and since we were meeting at the Depot (as in train!) Park, it seemed like a natural fit. 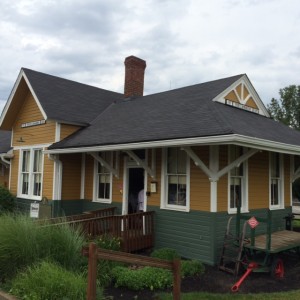 The Erlanger Depot Museum is one of the last remaining buildings of its kind in the United States. The museum building itself is an historic landmark. It’s a wooden railroad depot that was built in 1877 and remained in operation for 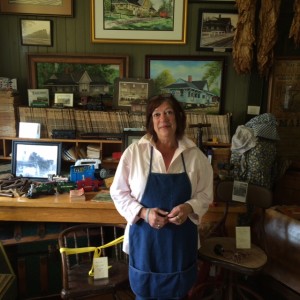 nearly 100 years. When the building was closed by the railroad, the Erlanger Historical Society raised the funds to save it, ultimately moving the building out of the railroad right-of-way and developing a very nice and well-used park around it. The busy freight line that still runs just behind the building sees trains passing through several times each day. In this particular program Michele Roszmann, of the Erlanger Historical Society and Curator of the Depot Museum, shared some transportation artifacts with program attendees; walking us through an abbreviated history of transportation in our area and in general. The depot was built when horse-and-buggy transportation still existed, and now sees high-tech diesel engines passing multiple times each day.

Other transportation facts were shared through several books, including True or False? Transportation! by Daniel Nunn, and Trains Can Float and Other Fun Facts, by Laura Lyn DiSiena and Hannah Eliot, among others. 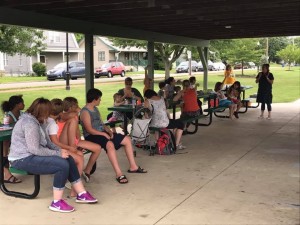 After the stories and facts were shared, it was time for some transportation crafts! The children had the choice between crafting a train engine or an airplane, plus they could also create a boat.

Trains were paper-and-glue, which could be colored as desired, making them an easy craft for the younger child 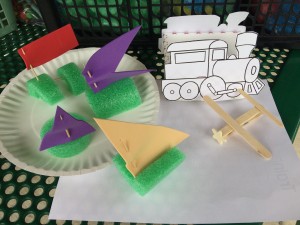 ren with adult cutting help. Gluing the train cut-outs to the sides of a paper fry basket made them stand up. The airplanes were a little more complex to appeal to the older kids; and could be colored with crayons or markers, or left “natural.” They involved gluing wooden pieces to a wooden clothes pin, and created a very cute plane when complete! The boats were crafted from pieces of foam pool noodles, sheet foam, and 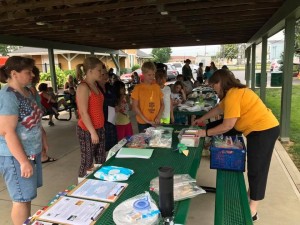 toothpicks. This was a super-simple craft, but involved much choice; including boat body color, sail color and shape, type of boat, and more.  Children were encouraged to take their boats home and practice floating them in the tub or sink… and to experiment by changing the orientation, shape, or size of the sails.

After the craft portion of the program was complete, the museum was opened to visitors, as it is after each Depot Park program. The restored 1943 caboose (seen above) is also open to visitors, and kids (and some adults!) love to explore the interior of the caboose. The trains passing through are used to seeing many kids at the park, and the conductors will often blow the train’s horn and wave out the window to the kids as they pass.

This program gave us the opportunity to share some terrific non-fiction books and fun crafts, and gave the Historical Society the opportunity to showcase some interesting pieces from their collection. The children got to practice with following directions and also with designing and creating in the different crafts. The program encouraged further exploration not only of library resources, but also local resources in the Historical Society and Museum. And it was a lot of fun! 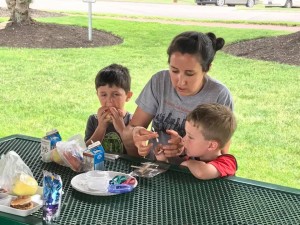