Steam From Home: Side Scooper

Around May of 2020, it became pretty clear that library programming was going to look different for the foreseeable future. Having successfully produced the Saponify! video, it seemed like, while not a perfect vehicle, a regular STEAM video program 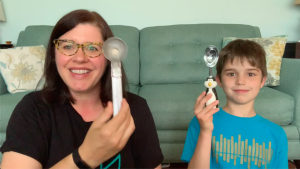 could serve as a stand in for my in-person monthly STEAM Engines program. Hence, the STEAM Engines from home series began. We rolled out a plan for two videos, produced monthly, each between four and six minutes on a different STEAM topic. Every video would include a topical story, book plug, or song related to the theme, culminating with a hands-on project or experiment that could be duplicated using items that are commonly found in the home.

The first STEAM Engines from home video, Side Scooper was born from a project that my son was assigned at school. He was attending classes remotely, and though his teachers were doing an AMAZING job on the fly, after a few months of uncertainty and living in flux, he was really burning out. Normally a naturally curious kid, he was just tired of it all, and was no longer finding joy in what he was learning. Until, that is, marrying eco-sense with germ safety, he was tasked with designing a tool (using recyclables) that could pick up trash without contaminating your hands. Not only did that spark rekindle, it blazed.

As I watched him work, I thought about what it was that was appealing about the project. Was it the problem solving? In this particular moment in history, there is certainly something empowering about being able to solve a particular quandary. I started thinking about engineering. Defining them at their most basic level, engineers are problem solvers. They identify a problem, then use math, science, and their imagination to come up with a solution.

Not only because we had been eating our fair share of ice-cream of late, I decided to focus on an incredibly useful, fairly ubiquitous tool that most kids would rally around: the noble ice cream scooper. The somewhat clunkily named “ice cream mold and disher” was invented in 1867 by Alfred E. Cralle, who bore witness to some servers hacking away at a block of ice cream and decided that there just had to be a better way. Mr. Cralle identified a problem, and engineered a solution, and though it has been through many different iterations, we are still using that solution well over a hundred years later. 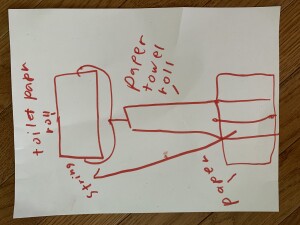 Now excited, I wrote an ode to engineers – okay, more of a jingle, but it’s super catchy, and we got to work. Desi mocked up a design for his creation, and I wrote a script. This was the first video we made that was largely propelled by Desi, using his concept, blueprints, and instructions for the project. I love that he came up with a product with moving parts.

We had a lot of fun working together on this video, and I hope it inspired some really exciting projects!