One of my favorite things about kid science programming at the library is the journey of discovery. I was as excited as the next curious citizen when the photo of the black hole was released in April. I was eager to show it to my son, who is generally fascinated by all things space, and I was not disappointed. “But mom,” he asked me, “what IS it?” and I found I couldn’t quite answer. Luckily for both of us, I’m a librarian, and that means one of my all-time favorite things to do is to find out. I decided to take advantage of the opportunity and dedicate the next STEAM Engines, Skokie Library’s K-2 science club, to black holes.

As the kids filed in, I played Jam Campus’ delightful parody of Jason Mraz’s I’m Yours, aptly entitled Black Holes. The kids settled in, and we read Elin Kelsey’s lovely You Are Stardust, a beautiful book that deftly illustrates our interconnectedness with space/time/earth. As we settled in, we talked about what a black hole might be. The room was split –
abo 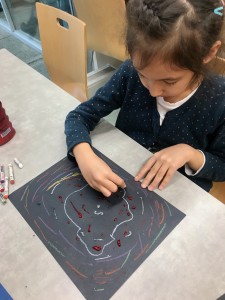 ut half of them had heard of black holes, but all were unclear about what they really were. “A hole in space?” Weeeellll, kinda.

I wanted them to take away a really basic understanding of how a black hole is formed, and what it is. We started with implosion and explosion. How does it look using your body? We imploded, folding in on ourselves and collapsing, then exploded, jumping outward, hands and feet flying. When a star runs out of energy, it IMPLODES, and that causes a big EXPLOSION called a SUPERNOVA. Our first take-home concept! 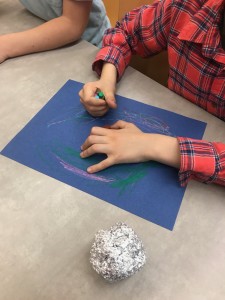 The supernova creates a big cloud of dust and glass which form big glowing clouds called NEBULAE. Our second take-home concept! This was fun to talk about because there are some incredibly beautiful photos of nebulae out there to help illustrate the point (thanks, NASA!).

Incidentally, as I was prepping for this program, I fell down a really interesting rabbit hole learning about how these photos are created. They are not just a snapshot of space, rather, a collection of data and images collected from telescopes like the Hubble, which are then cobbled together and tinted using the information gathered. They are approximations based on what scientists estimate the human eye would perceive. I like thinking about the artists who create these images.

Then we tried a hands-on experiment, based on a simplified activity from NASA’s Afterschool Universe on black holes. I gave each parti 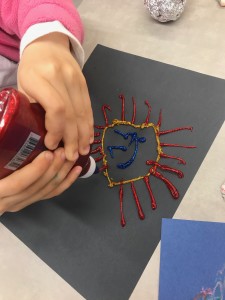 cipant a balloon and helped them blow it up about halfway. Then they covered it in foil and we weighed them. Squishing the balloon, we felt the give — “our hands represent gravity, friends!” And then we popped them. [Relatively controlled] chaos ensued. The idea here is that if we carefully popped the balloon under the foil, it would maintain its shape, but there’s no more push back. Our stars were imploding. We crumpled our foil bit by bit, weighing it along the way. ALL of the kids predicted that the foil would weigh less without the inflated balloon, and were excited to discover that even when they crumpled it as tightly as possible into a tiny ball, it weighed approximately the same. We made black holes!

Using the foil experiment, I explained that the imploded star collapses in on itself, but loses none of its density. Pulling from the middle, it gets smaller and smaller until it becomes a teeny tiny, super heavy dot. Kind of like a doughnut, right? Because I firmly believe that if I throw something silly but relatable in there, knowledge will be better retained, we used a doughnut to represent the parts of the black hole. The 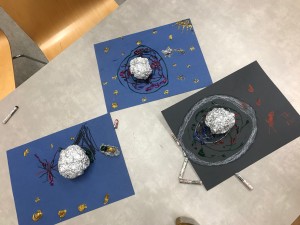 doughnut itself represents the EVENT HORIZON, and the hole being the SINGULARITY. Mmm…space doughnuts.

With about 10 minutes to spare, we headed over to the craft room, and using black construction paper, cray-pas, and glitter glue, the young scientists created their own nebulae. Note that many of the kids became attached to their foil balls and either added them to their nebulae, or kept them for posterity. Masterpieces, all.