May the Fourth be With You: Star Wars Day at the Library

I know that it’s giving away my age, but I remember when the very first Star Wars movie came out.  I watched it from a swing-set in the small, fenced-in playground at the foot of the giant screen of the drive-in movie theater.  The playground was surrounded by the same heavy gray metal boxes that were hung on the car doors of theater-goers, and served as movie speakers.  That way I could enjoy the movie while my adults could enjoy it, as well, without my nervous energy distracting and annoying them.  Now there is another generation growing up with their own Star Wars movies, and mythos of that universe, created so many years ago.  It’s a credit to the creativity and genius of George Lucas that Star Wars is still alive and well. 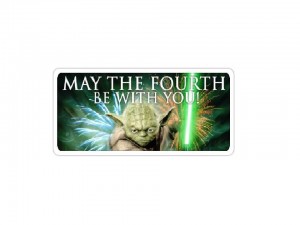 In fact, as many may know, May 4 is Star Wars day.  The holiday even has its own website, right here.

In honor of Star Wars Day, my programs this week had a Star Wars theme.  Tuesday is normally Gadget Lab, a time when 6-12 year old’s can hang out in the program room, get comfortable on a couple of piled up cushions, and try out and/or chill out with the library’s Kindle Fires, iPads, iPad Minis, and Samsung Galaxy Pros.  (If their feet don’t stink, they can even take their shoes off.  That’s actually a big draw for the program.  I’m not sure why…)  Recently, I’ve added another activity to the offerings during Gadget Lab – coding.  I have been bringing some Ozobots that I bought to Gadget Lab and teaching anyone who’s interested the beginning steps of coding. 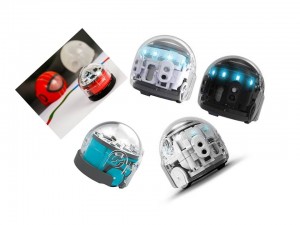 This past Tuesday, I brought the ‘bots, as usual, and the day’s coding challenge was to get the tiny robot through a maze that started at Tatooine, and wove its way past both allies and enemies to end up at Alderaan.  Several young people accepted the challenge, and there were little flashing bots all over the table for the entire program. 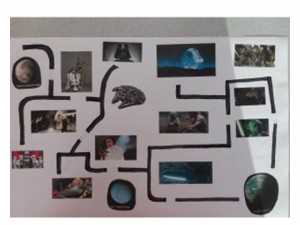 Thursday was my other weekly program, Crafternoon.  This week, participants walked into the room to discover a 10’x10′ maze on the floor, Star Wars music playing on the cd player, and Star Wars robots ready and waiting to be guided from the beginning point to the end in the opposite corner.  The maze was built of a multitude of bookends I borrowed from all over the building and from a branch or two, with long strips of bulletin board paper folded lengthwise and draped over the bookends.  I was still preparing the maze when the first arrivals walked into the room.  They helped me with preparations for a little while, then they grabbed iPads and gave the maze a try.  At first I considered going ahead and filling in the center of the maze, the only area not completed, while participants figured out how to guide their droids, but everyone was having such a great time sitting in the middle of the maze while guiding BB8 and BB9 around the course, that I decided to leave the center empty.  I will keep that in mind for the next time I design a robot maze challenge for the group. 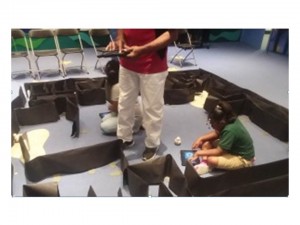 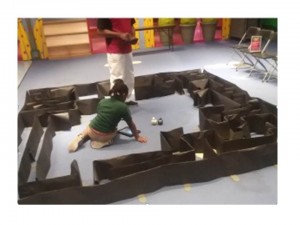 What the kids Tuesday and Thursday didn’t realize, and which I didn’t tell them, was that they were learning a very important concept that they will need to know to be able to guide the bots, whether they are working with the Ozobots or the Spheros, or any other guided robot – left from right.  Over the last several weeks, as I’ve begun to teach coding concepts, I have discovered that most of the children I work with don’t know their left from their right.  One child earlier this week tried four different robots on her maze, assuring me each time the bot ended up in the clutches of the Dark Side that I bought broken robots.  It wasn’t until I had her turn her paper as she followed the maze with her finger, that she realized the bots were doing exactly what she told them to do – run straight into the squadron of storm troopers.  It’s a basic concept, and one that children that age should have mastered, but clearly many have not.  This week they got some basic concept reinforcement while having a lot of fun.  Next week, hopefully, we can move on to master another step in learning to code…