Willa Kopp-DeVol, a Junior at Animas High School in Durango, Colorado, recently served a 3 week internship at the Space Science Institute (SSI) in which she worked with both the research and education departments. Her school’s Leading Internships for New Knowledge (LINK) Program takes students beyond the classroom walls in order to clarify personal, college and career goals while teaching invaluable professional skills and life lessons.

Below is the second installment of this blog series. Click here to view part 1 of her personal thoughts on her internship experience.

For the last 2 weeks of my internship, I worked with the department of education. Although the hard research was very interesting to me, a huge part of science is getting the important information out to the public and getting people involved and excited to learn about science.

The Space Science Institute does this in many ways. Firstly, Star Net is an initiative under NCIL that allows libraries to use funding from several partners for STEM related exhibits and training. A project of Star Net that I was exposed to is called NASA@ My Library. This branch is focused on increasing STEM learning opportunities through professional development and resources to 70 libraries around the country. There is also a focus on serving underrepresented groups in the community. NASA@ My Library has been used for solar eclipse events, boys and girls science lock-ins, student workshops, and more.

Another thing that the SSI does through NASA@ My Library is to encourage/teach partner libraries to hold community dialogues. Each library needs to know what their community wants or needs, what it is not getting, and how they can help improve this. NASA@ My Library also puts an emphasis on STEM learning in these community discussions. Anne Holland originally came up with this idea in trying to get feedback for an exhibit. The experience was so beneficial that she realized she could expand and structure this idea so more organizations could use it. It is one of the most straightforward ways to get to the root of problems and to also understand your community better by having an open discussion based on learning from one another.

I was first introduced to the idea of community dialogues when I attended a webinar about them. The webinar was set up like a large video call where the person giving the presentation was the one on video. For the length of this time, Anne Holland spoke about the importance of feedback from the community. I found it very informative and thought that community dialogues were a great way for voices to be heard and changes to be made.

For the second part of my LINK, my project was to plan/help create one of these dialogues for teens. Being a teenager myself, I find a lot of underrepresentation and lack of programs for humans my age. Because of this, teenagers are a quiet voice in the chaos of improvement. There are many issues that teens (specifically ages 14-18) face without support. By planning a dialogue I hope to help the American teens who feel they do not have a place to speak up or make a change.

Anne, Jennifer, Stephanie and I all collaboratively used the current model of the community dialogue guide and altered it to include/be directed towards teens for my LINK project. Now I (and anyone who would benefit) have a general guide that allows libraries to effectively plan teen community dialogues and get helpful results.

A key to a successful dialogue is that everybody feels comfortable to express their thoughts and talk to one another. A great way of encouraging this is through refreshments, foods, and icebreakers. I decided to design my own icebreaker activity which would be based around art, one of my favorite hobbies. For this activity, each participant would work together to design an alien world. Drawing the landscape would be the first step, and then they would pass their paper to the left. Next, they would draw the plants, then the animals, and so on. Their paper would go around the entire group until each person came out with a unique alien world created by/with their peers. I personally love thinking up wacky aliens and their planets because there is no right or wrong way of creating them. Aside from the icebreaker, I came up with a couple of lists including invitees, common issues among teens, potential discussion questions, and other activities that may help people ease into or out of a possibly hard-hitting discussion. ​ 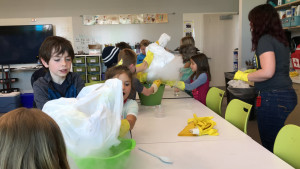 On a bright Thursday morning, I took a trip to Meadowlark Elementary School. I was there with Stephanie Vierow-Fields and Anne Holland to do a fun activity with the students there to teach them about comets and asteroids. The idea was simple: create a comet! Anne went over some basic concepts first to help the kids understand the difference between asteroids and comets. The most prominent difference is the tail of burning water that trails behind a comet and not an asteroid. She also explained that scientists now believe that comets and asteroids are the same things, only one is closer to the sun so the ice begins to melt. This leaves the tail. 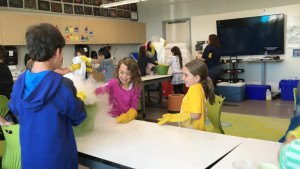 There were several stations positioned around the room. Each station had a large bucket with a plastic bag inside, a spoon, sand, water, and corn syrup. Once in groups of 3-4, the students added the ingredients to the bucket and stirred them together. Each ingredient served as a different piece of the comet, including the sugars in the corn syrup representing organic molecules. (Perhaps not unlike the ones that formed life on Earth.) After that, Stephanie put a dash of liquid ammonia into the mix, to which most kids wisely turned their noses up to. The most exciting part of the comet was making the tail. For this, kids added a cup of dry ice to their “comet” and watched with wide eyes as the smoke billowed out of their trash bag. The next instruction was to squish all the ingredients into a ball. With gloves on, the comets were taken out of the bags and the smoking chunks of ice and dirt were passed around the groups in awe. They had just made their own comet with a tail and all! After this Anne passed around some meteorites that had been found on Earth. The students were also fascinated by these, holding the heavy rocks close to their faces. 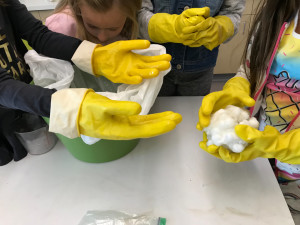 Once the whole activity was done and all the groups had gone through, we cleaned up and headed off again. I was surprised at how drained I felt because I was just a helper! It was fun though, and definitely worth it to see young students getting excited about science and space. Hopefully, we provided an inspiring experience that these kids deem worthy of remembering.

Lafayette Library (5/6/19)
On the final Monday of my internship, I went to Lafayette Library. I was again accompanied by Anne and Stephanie, and we were there to prototype games and toys. We arrived and set out several activities for the kids at the library to do. 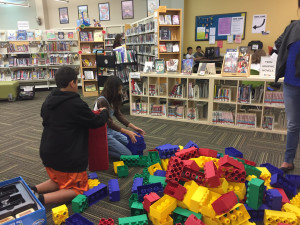 The toys included simple coding robots, a coding game, and a large building block set that was used to teach about computer processors. The goal of the prototyping was to determine if the children could understand and learn from the games with or without supervision. Some robots were intuitive, as well as the huge Lego set, but others had more of a learning curve and were harder to code. Kids of all ages played around with the toys, and it was obvious which robots and toys were most popular with certain ages. We also noted that the board game was less popular when paired with the robots. This was all helpful to know. Anne and Stephanie also had the students and their parents answer a couple of short questions to determine if the general public knew of the terms that they were using. Overall, it was fun to see kids playing with and learning from toys, and I also enjoyed playing with them at times.

Final Thoughts
Working with the education department at SSI has taught me a great amount about the process of education from an organization’s perspective. To be on the flip side where I am teaching and helping is much different than the student role which I have been accustomed to. It has opened my eyes to what goes on “behind the scenes” and the work that goes into education. I also really enjoyed seeing kids learning from all of the tools and programs that the SSI provides. It is great to see young minds engaged and excited. I feel that I better understand what it means to be an educator in this field now, and have more respect for those who are.