Light and Color and Uncooperative Weather

The best-laid plans often go awry…  so how to program on the fly for a large group when that happens?

My Monday Mayhem program is attended by a lot of school-age kids, including those who attend two separate day care summer camps. Planning for 80 takes some work and means that it is difficult to change activities without some advance thought and materials-gathering. As such, I learned a valuable lesson last week about planning… always have a back-up if the activities rely on the sun.

The theme for the program last week was Light and Color, and while I had a number of activities prepared and had already planned to set up stations, the primary activity involved going outside and working with UV-detecting beads and sunlight. I realized during the weekend that the weather forecast was likely to make that difficult, so I was scrambling to figure out something I could do should it be too cloudy for that activity. I had already gathered a number of non-fiction books about both light and color, and displayed those along with a handful of fiction titles related to the topic. We began with reading The Day the Crayons Qu

it, by Drew Dewalt, as a humorous introduction to the topic. That was followed with the book A Color Sampler, by Kathleen Westray, which deals with color theory in the realm of art- the color wheel, color mixing, and more. I also shared the book Sky Color, by Peter H. Reynolds, to get them thinking

a little about our perceptions of color and how light and color interact. While I shared this title, we had some discussion about how color and color mixing is different if you are talking about art or light and used that discussion to lead into the light portion of the topic. Using some bits from several of the non-fiction titles, we addressed the way light travels in waves, how humans only see a portion of the light spectrum, and dividing white light into its various parts. And this is where the (lack of) sunlight came in.

The plan was to hand out UV-detecting beads, (available both here: https://www.teachersource.com/product/ultraviolet-detecting-beads/light-color from Educational 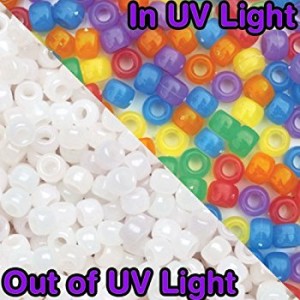 Innovations, and here: https://www.stevespanglerscience.com/store/uv-color-changing-beads.html from Steve Spangler Science) having the kids make bracelets with them and chenille stems, then going outside and do a number of experiments with them. I had purchased several different levels of sunblock and some cheap sunglasses, and had some black paper on hand; the idea was to test how much UV light actually gets through the various blocking methods to the beads. The beads come from Educational Innovations with activity instructions which include information about the spectrum and this particular activity. They probably come from Steve Spangler with similar instructions.

Since it was likely to be raining the morning of the program, other options were necessary. Fortunately, one of the 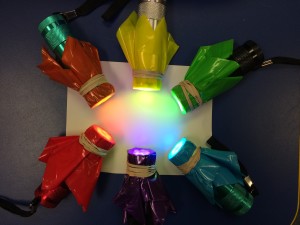 science tools I have access to for programming is a set of 30 small but relatively bright LED flashlights. An activity in the book Magical Experiments with Light & Color involves using flashlights with the lenses covered by pieces of colored

cellophane to experiment with mixing the various colors of light from the spectrum. Since I didn’t have any colored cellophane on hand and only needed small pieces, I instead purchased translucent colored plastic treat bags, and with rubber bands, covered the lenses of the flashlights with them. With just the flashlights and some pieces of blank white paper, kids were able to mix the colors of light and discovered that they didn’t behave the same way mixing colors of paint or other art media does. While this was a super-simple activity, it challenged what they expected to happen, and many of the kids loved experimenting with the different colors of light.

In a related activity, I included a station to test the understanding of coloring mixing in art media. While the mixture of all light colors in the spectrum results in “white” light, mixing all colors in art results in black. This is a concept we addressed a couple of times during the reading. I included a station equipped with water-proof paper plates, white paper coffee filters, black water-soluble markers, and spray bottles of water. When they write and draw on the coffee filters with the black markers and then spray them with water, the filters act as separators for the ink of the black markers- which are actually composed of a mixture of colors. An overview of the experiment is available here: https://www.exploratorium.edu/science_explorer/black_magic.html and is also included in several of the books I had on display. Once they had their drawings completed, they were instructed to set the filter, on the paper plate, into a large aluminum pan and spray it lightly with water from the spray bottle. This actually did two things- it created interesting color separation on the filter, and also created a color-separated transfer image on the plate.

And since science isn’t science when everything you try to do works exactly the way you planned… at another station, I had set up sheets of colored tissue paper, card stock, and spray bottles filled with water. The idea was to cut or tear small pieces of tissue paper and arrange them in a pattern on the card stock, spray it lightly with water, and after allowing it to dry somewhat, peel off the tissue paper to reveal a transfer image on the card. The idea was to compare the way the colors blur and run together in the transfer image with the color separation in the coffee filter experiment. However, this particular experiment failed miserably! The tissue paper we used is apparently “run-resistant” which means it is treated in some way which totally prevented the colors from transferring to the card stock, even when it was soaked! All we really had as a result of this experiment was a bunch of curled, wet card stock, and piles of soggy, messy, wet tissue paper. I later learned that you can now purchase special tissue paper designed to actually run the way it all used to, and it is available from Amazon, among other places, here: https://www.amazon.com/Spectra-Art-Tissue-Deluxe-Bleeding/dp/B00PV0WNYU. Because kids are kids, though, even after it was extensively proven that this particular experiment did not “work,” kids kept cycling through it, making a rather large wet tissue paper mess. It was apparently fun, even if it wasn’t “successful.”

And since they were already prepped, the remaining station was for the UV bead bracelets. The kids created their bracelets regardless of the rain, and were give the instruction to go home with them and try them out with their sunscreen at home on the next sunny day. We did discover that even through the tinted meeting room

windows, and in spite of the rain, there was still sufficient UV radiation coming in the windows to make the beads turn colors, at least partially. The kids were still amazed, and it actually served to make them a little more interested, perhaps, in what would happen to the beads on a bright, sunny day! When we were finished, the program seemed to be successful, in spite of the failure of the tissue paper activity and the lack of sunshine.