It’s the end of the iWorld as we know it

If you own some older Apple tablets, you might have noticed a new trend when trying to download apps. At first, I thought it was really cool that I didn’t have to update my iPads every other week (take that, Apple!), and I didn’t realize what was to come.

As I’ve started to explore my role as Technology Librarian, I finally have time to go through my library programming bucket list. The more I prepared for my programs, the more I encountered that newer apps were not compatible with my older iPads.

I was kicking myself because our IT manager had budgeted to replace them the year before. I declined and suggested we use the money somewhere else because they were completely functional.

The biggest saga was for a program called “Little Printers”. We have two 3D printers on display at our library. We regularly teach 3D design through Tinkercad, but it’s best for third grade and up due to computer skills and attention spans. We have so many younger kids aspiring to make their own design, but don’t have the coordination or motor skills quite down to convey what they really want to see in their design. I had a great idea to have the younger kids make a drawing, and convert the image from 2D to 3D. They would be really easy to print, too. I was going to use MakerBot’s PrintShop. When I started prepping for the program, I found out how out of the loop I’ve gotten – PrintShop had been discontinued for over a year. Whoops. Mayday. I heard good things about Morphi, and I came across Doodle 3D while searching for a PrintShop replacement. Doodle 3D seemed to be a good thing, but when I tried to use it on my oldies, I would just get a blank white screen. The developers are based in The Netherlands, so communication was staggered. They said they were aware of the issue, but didn’t have a timeline for fixing it. My guess is that they didn’t connect it with the incompatibility issue. Morphi was next. Their app was straight up incompatible. I pulled a last ditch effort and emailed them asking if they had an older version they would release or send to me so I can do this program. They emailed me back saying they were in the works of making a version specifically for older iPads. I sweat it out, getting closer and closer to the program date with just a hope and a prayer. I figured worst case I could have the kids use the Tinkercad Scribble beta. Luck was on my side, as I got a magical email from Morphi right before my program. We were good to go.

Surprisingly (or maybe not?), the grown ups were incredibly interested in turning their drawings into 3D designs. I had to remind them to also convert their children’s illustrations. 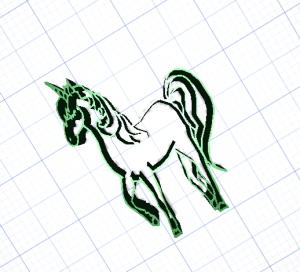 Totally not a kid’s drawing

I recommend just giving the kids (and adults) markers. I gave the option of crayons as well, and every crayon drawing was a pain to convert. Most of the 3D designs converted and printed really nicely, and families were able to pick up the creations within the week. I personally got to hand off a dinosaur to a 4 year old that I convinced to attend the program in the first place. His glowing smile alone is reason enough to offer this program again (I am in December). 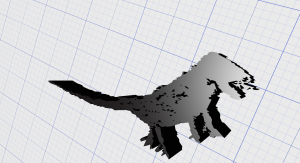 Unfortunately, I don’t have advice for the other educators that have older iPads. I just suggest keeping expectations in check, but it doesn’t hurt to ask. If enough of us explain our issue to developers, they might find it worth releasing older models of their programs to help more users. Good luck!