Towards the end of summer, I fell victim to one of those AMAZING PAINTING YOU WILL BE MESMERIZED type videos floating around on social media. I admit that, like a cartoon squirrel presented with a decoy nut, I am easily captivated. I am han 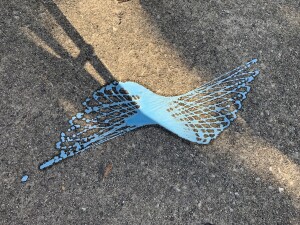 L videos regularly siphon valuable minutes off my life. But readers, there was something to this AMAZING PAINTING video. It was an art form called pendulum painting, in which an artist sets a hanging paint container with a hole in the bottom into motion. The forces of gravity take the paint container on an elliptical path, and the drips create amazing patterns.

This was the kind of project that looked reasonably easy to replicate with kids, and presented an opportunity to connect it to some STEAM programming. Hence, STEAM Engines: The Busies

Desi and I started off with a very brief outline of what physicists are all about. We discover that they study matter, defined as “everything around us…including us,” energy, or “how things move,” and forces, or “what happens when two objects inte 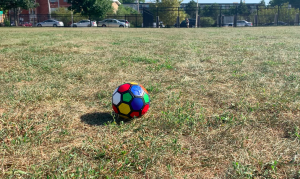 ract with each other.” In other words, physicists use math and science to explain why things do what they do. To further illustrate this point, we broke down Newton’s First Law of Gravity: An object at rest tends to stay at rest, and an object in motion tends to stay in motion unless acted upon by an outside force. I really wanted Desi, and any kids out there watching, to understand this concept, and since I’m the kind of learner that really needs an example to drive the point home, the kids and I made a quick clip involving a soccer ball and a net. A soccer ball laying in the middle of a field is an object at rest, until someone comes along and kicks it. Once it starts moving, it’s going to keep moving until something stops it, like the back of a net. 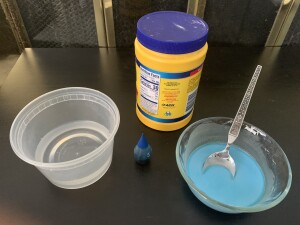 d with that, we move on to our project! The most exciting pendulum painting videos I saw were done in a big space, with plenty of room for the paint to swing. I don’t have a good indoor space for that,

but what is a sidewalk for if not a receptacle for chalk? I wanted to use something that would not permanently stain the concrete, and would not be environmentally harmful, so the kids and I decided to make our own liquid chalk. We used a mixture of water and cornstarch in roughly equal parts, and then mixed in some food dye to make it pop. We suspended our paint from a stick between two chairs, and let it go. Though not as impressive as those MESMERIZING videos of social media fame, we were proud of our creations. 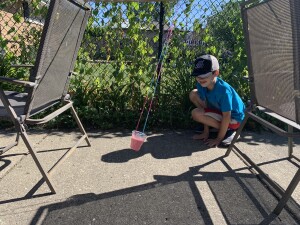 I encourage all who try this to think about ways you can change your paintings. What happens when you make the hole bigger or smaller? What if you swing it in a circle? Does speed make a difference? After all, that’s physics, right? Making observations about things around us, and figuring out why they do what they do.