Indoor astronomy is a great way to light up the night! We recently did that, both figuratively and literally.

I have done a fairly large number of astronomy programs in the past 5 or 6 years, both with and without the library’s 8″ Dobsonian telescope; both indoors and out. I want these programs to be both about learning and fun… I want to encourage kids and their adults to spend time looking at the sky when they are outside, even if they aren’t sure what they are looking at or for.

Since the moon is an easy place to start, I began the program with a non-fiction title about the moon: 20 Fun Facts About the Moon, by Ryan Nagelhout. Each fact included in this book was indeed fun for the kids, and several of them were things I didn’t know either. They seemed to enjoy making comparisons and using the facts as a way to envision the moon in a slightly

We also read the book Seeing Stars, by Dandi Daley Mackall. This title introduces some of the best-known of the northern constellations, including Orion, Draco, and Cassiopia, among others. This is a simple to understand look at how to find them in the sky, along with being fun because the stars are foil and shiny! 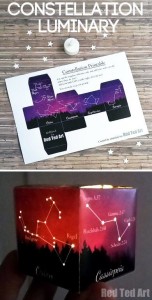 After a few additional minutes of questions, answers and comments about the stars, the moon, and the sun, we moved on to the activity, which I found here: https://www.redtedart.com/5-constellations-kids-should-know/

The printable cube can be reproduced in a version with the stars labeled, or without labels. Once the cube has been cut out, a pushpin is used to poke holes in each star. The cube is folded (and in our case, taped on edges except for the top) and then a battery-operated tea light inserted into the cube and the top closed. In a dark room, the constellations shine through the tiny star holes poked in the box sides, creating a very cool night light. In a small room, it makes fun shadows on the wall or ceiling as well.

In addition to the printed cubes, the only materials required were scissors, pushpins, and tape. I had previously purchased battery tea-lites at Walmart for another project. They are also available through Amazon, here. We used blocks of recycled packing foam as a base on which to poke the holes, preventing the tabletops from getting poked. Poking pins into the foam repeatedly when projects were complete was a big hit too. 😉 Some of the kids needed some help with getting the cubes folded properly, but there were enough kids who had no problems with it that they could help the others with theirs. It actually worked pretty well as a way to both get the kids to interact a bit more and to even out the timing on the completion of the project. We didn’t have kids who were finished and waiting around wondering what to do as a result, since they spent time assisting the others with their projects. There are many variations of this project available, but everyone who saw it agreed it was pretty cool when complete, kids and adults alike.

Remember to look at the stars, and let your little light shine!