When we first learned we’d be hosting the Explore Space exhibit from STAR_Net at our library this fall, we spent quite a bit of time browsing through program ideas and how-tos as we started to formulate our program schedule. Each month at our library, we offer an elementary-age STEAM program called Be the Scientist–and we knew we wanted the fall 2017 programs to tie into the exhibit and space in general. When we found the Jump to Jupiter program plan, we knew we’d found something that would work for our community. We tweaked the program to fit–literally–at our library, and named the program “Planet Hoppers.” Here’s what we did.

We started the program in our program room with an introduction about both the solar system–the eight planets and Pluto, specifically–and also about scale. As per the Jump to Jupiter program plan, we prepared ahead of time a scale model of the planets using household items like marbles and peppercorns. As we talked about relative size, we discussed what it means to create a scale model of something. Kids astutely gave the example of a real house versus a doll house, in which the doll house is a scaled down version of the real thing. With all the kids showing that they understood scale, we talked about our next activity: going outside to “hop” the scaled distances between planets, giving us a sense of the size of our solar system. 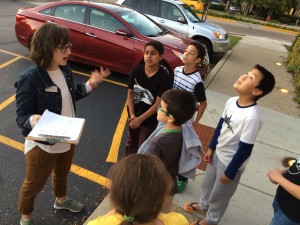 Discussing what we know about the planets on our journey.

Once outside, we reviewed a few rules: not getting too near the street, staying close to one of the program leaders, and the signal for quieting down. Then we started hopping between the planets. The Jump to Jupiter program plan includes a table with a scaled number of jumps or steps between planets; because of the amount of space we have surrounding our library building, we further scaled these steps down by a factor of 2. Thus, Mercury was two and a half hops from the Sun; Venus two hops from Mercury; and so on. We didn’t get very far as we traversed the distances between the inner planets, even though kids were trying to take the largest hops they could. After counting together each of the hops, we stopped to review the scale model of each planet (i.e., a poppy seed for the relative size of Earth). We then talked about the relative closeness of these inner planets, and we asked kids what they knew about each of the planets. This was a great opportunity for kids to share their knowledge with one another.

By the time we got to the outer planets, however, the number of jumps between each planet went up significantly. As kids made the 86.5 hops between Uranus and Neptune, and the 75 hops between Neptune and Pluto, they really started to grasp the vast distances between the planets. We talked about whether we’d be able to see the poppy seed Earth from such a distance–an idea that really seemed to help give perspective of the size of the solar system. 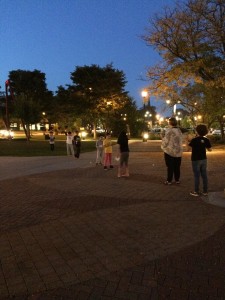 Lining up for our planetary dance.

Our hopping to Pluto also brought us to the Village Green, a public space adjacent to the library that has a paved center section. There we started our final activity: a planetary dance of sorts. We had enough kids in the program to each represent a planet or other solar system object, and we quickly lined up with each child/planet in approximate place based on distance from the sun. We briefly talked about orbits, and which planets have faster or slower orbits, and then we started our dance. As the light faded outside on the evening of the program, our child/sun stayed still in the center of the Village Green while all the planets orbited and twirled around. The dance wasn’t particularly accurate as to the distance and timing, but it was fun–and it gave kids an idea of all of the simultaneous movements of the objects in our solar system.

At the end of the program, kids had a greater sense of the size of the solar system and the complexity of all the bodies that move within it. They’d hopped from planet to planet, and they’d danced like the planets do, too. All in all, Planet Hoppers proved to be an informative, imaginative exploration of space.