While we all know that the Sun is very big and very far away, its actual size and distance from Earth can be hard concepts to grasp. Many Solar System models that we see inaccurately display the relative size of the Sun compared to the planets, and almost all models inaccurately display the true distance between Solar System objects. This isn’t due to a lack of astronomical knowledge, but rather the amount of space that an accurate model would require! For example: an accurate model with a marble-sized (one inch in diameter) Earth would call for a nine-foot wide Sun and 5.6 miles of space to accommodate Neptune’s orbit. Thankfully, this Scale Model of Sun and Earth activity will give participants a much better understanding of the relative size of the Sun and Earth and the distance between them – and you only need sixty five feet of space to do it!

For this activity, you will need Sun and Earth cutouts from the activity page, a hallway or open 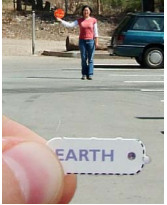 Make sure to leave a review of the activity after trying it out!