A conversation about superpowers during a STEAM Engines (Skokie Library’s K-2 science club) program on the science of flight culminated in a split vote. Me: flight – I mean COME ON – vs. the kids: invisibility, which naturally meant that our next program would have to be about being invisible. It’s a real bonus when the kids are excited about the subject matter, and to be fair, I was too. As much as I would prefer flying, I have to admit that the ability to scoot around unnoticed would be very cool. 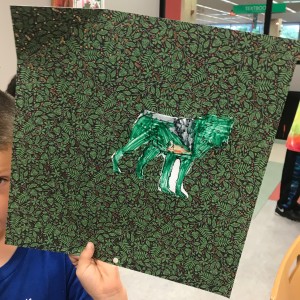 I started the program with a picture of floating sunglasses and a hat, while the Beatles’ 1965 hit You Won’t See Me played in the background. We settled in, and started talking about what it means to be invisible. The kids had a lot of ideas, like “the cloak from Harry Potter!” and there was some discussion about why that might be appealing. Answers ranged from pranking family members to sneaking out of school, as one might expect, but one boy stopped the conversation with a loud WAIT! “Is there really such a thing as an invisibility cloak???” We were all disappointed that such a thing does not (yet) exist, and that led us to talk about what being invisible in real life looks like (see what I did there?).

Pulling back a little, I refocused by introducing Aura Parker’s very adorable picture book Twig, in which a little stick bug struggles to be noticed in her woodland classroom. We finished the book, and began to talk about nature’s invisibility cloak: camouflage. We talked about the reasons why an animal might want to be unnoticed (besides pranking one’s sibling), and came up with hiding from predators, and sneaking up on things, specifically prey. This mostly covers it, but I wanted to send the kids home with 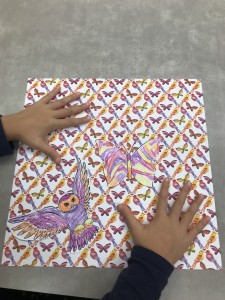 a couple of simplified concepts: 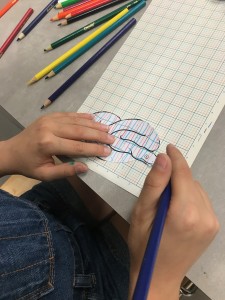 Honestly, I loved falling down this rabbit hole. I am impressed by how adaptive nature is, and I relished looking at pictures and videos of creatures in disguise. After going over the big four, we watched a very impressive video of a chameleon changing colors, and then the amazing mimic octopus, which alters both it’s shape and its behavior to dupe predators and prey. The kids were suitably impressed, and then we started talking about how a human might be able to camouflage. Of course we have costumes and makeup at our disposal, but I was thrilled to introduce them to the art of Cecelia Paredes, who paints herself into complex backgrounds. 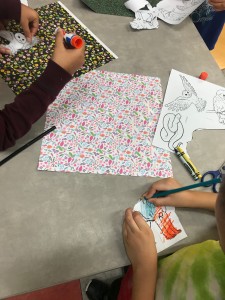 Now inspired, we headed off to the craft room to make something. Here I had gathered black and white pictures of different animals, colored pencils, and flamboyant scrapbooking paper. I encouraged the kids to either use some of the techniques that they had learned from animal camouflage, or to work like Paredes and color their animals into the background of their choosing. As I’ve come to expect from this fantastic, curious bunch, the results were amazing.