One of the greatest things about living with my son is watching how his brain works. He is a tinkerer, a “how things work” enthusiast, an engineer, and a builder. Where he sees a world of possibility in a pile of Lego, without clear instructions and a plan I see clutter and confusion. Where I see a mess of sticks, he sees a potential fort. Nothing exemplifies this more than the following example: One Saturday morning not long ago I asked Desi to clean up “a world of possibility” from the middle of the floor. He agreed, and I returned a hour later to find the pile unchanged, but for the addition of some trucks, cardboard tubes, and other household utensils. Exasperated, I asked for an explanation, and he stated simply that he had not in fact been diverted from his task. Rather, he had created a (bizarre and complicated) system of scooping, sorting, and hauling that, if allowed to continue, would take days to complete. Here’s the thing, though. It DID look like fun. And this got me thinking about one thing that we both absolutely agree on: we love a contraption. We have never met a Rube Goldberg machine we didn’t love. From Pee-Wee Herman’s amazing breakfast machine, the deliciously time-wasting gate opener in the brilliant kid epic Goonies, OK Go’s assurance that This Too Shall Pass, to a cornucopia of contraptions on Sesame Street we are captivated – eyes shining, breath bated. Can I blame him  for looking for magic and inspiration in the a mundane task?

All this got me thinking about Rube Goldberg himself. Though I’ve seen plenty of machines, I didn’t know much about their origin. Before I get too far into the weeds, a quick definition to make sure we are all still on the same page. A Rube Goldberg machine is a contraption designed to complete a simple task in the most overtly complicated, silly way possible. Their namesa 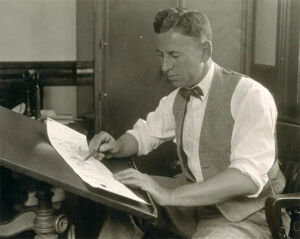 ke, Ruben Lucius Goldberg was born in 1883 in San Francisco, CA. As a child, Goldberg loved art, and was interested in being an artist, but his father steered him in a more practical direction. He studied engineering in college, and upon graduating, got a job working as an engineer for the San Francisco Water and Sewers Department. Unfortunately, the job was not a good fit, and it wasn’t long before Mr. Goldberg left his position at the Water and Sewers Department for a position making cartoons and sports writing for various newspapers. This led to other work making wildly successful comics (and eventually winning him a Pulitzer prize!), among them, a strip called Professor Lucifer Gorgonzola Butts A.K. Professor Butts carefully designed the wackiest, most outrageously complicated contractions, and readers LOVED it. The machines in those comics went on to inspire engineers, artists, movie makers, cartoonists, comedy lovers, and kids everywhere. In fact, though he never actually build any of his own machines, Rube Goldberg is the only person whose name has ever been in the dictionary as an adjective! He’s ADJECTIVE famous. 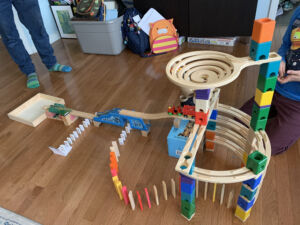 A brief aside and musing about meandering career paths – As I did this research, I spent some time thinking about that choice that so many of us are faced with when moving into adulthood: do I spend time, energy, and money on a career that will likely not financially pay off, or do I what my mom (specifically) says and focus on a practical area that will gra

nt us, if not creative satisfaction, financial stability. Eschewing the advice of my mother, and the path taken by Rube Goldberg, I opted to focus my study on theater arts, and though the specific career I had hoped for (BROADWAY, BABY!!) did not pan out, I can honestly say that I use my degree and learning every day I am at work. It influences the way I plan programming, the way I interact with patrons, and the way I collaborate with my teammates. Just further evidence of the benefits STEAM/STREAM model of learning. And in Mr. Goldberg’s case, the converse is certainly true. Though he was unhappy in engineering, one can certainly see the influence his studies had. Professor Butts was modeled off of some of his college professors, and traces of meandering pipe mapping from his brief stint at the San Francisco Water and Sewers department can be found in those labyrinthine machines. On a very basic level, we can see that moving along in a big, beautiful circle, science helps us to understand the world, and art helps us interpret that understanding, which leads to better understanding, which leads to creativity and progress…

With all of this information (and also having watched about a hundred really exciting examples of AMAZING Rube Goldberg Machines), Desi and I decided to build our own. We challenged ourselves to build a contraption that would clean u 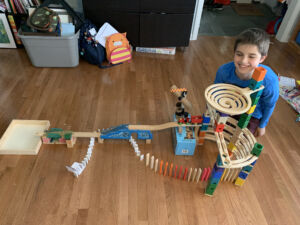 p LEGO. We spent an entire afternoon planning, experimenting, failing, stomping off furiously, and then trying again (and again and again) before coming up with a design that worked, and friends, let me tell you – it felt SO GOOD. By the end of the afternoon, our whole family was involved. It was the perfect way to spend an afternoon, and we encourage you to try one too! This worked well in the context of an asynchronous program video, but I think this would also 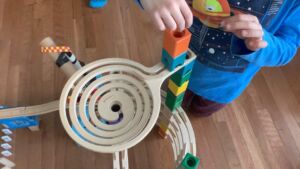 Until that happens, if you don’t want to create your own challenge, there are nationwide Rube Goldberg Machine challenges and contests that are every bit as fun to watch as they are to participate in. These contraptions are a great way to foster your inner engineer, complete with sequencing, ingenuity, and a sense of humor. We hope you have as much fun as Desi and I did! And remember: keep it silly.