pport their flight initiatives. Perhaps most prominently, he was involved with the Viking 1, the first spacecraft to successfully land on Mars! For the purposes of our program, however, we chose to focus on his work as an exobiologist. Don’t know what that is? We didn’t either! The kids had fun guessing, though. Turns out it’s perhaps not as heart-racingly thrilling as popular culture would have us think – I think there’s a fair amount of dirt analysis involved.

Early on, Chappelle made some very important discoveries about the light that comes from fireflies. This informed a lot of his work, including searching for viable life on other planets, detecting bacteria, and monitoring plant health.

As always, we began the program with a picture book. In addition to simply sharing my love of reading

aloud, and the myriad benefits therein, this centers our group and gives us a springboard for the activities to follow. In this case, we read Eric Carle’s The Very Lonely Firefly. Though this is not the most advanced text, it got the kids thinking about some of the reasons that fireflies might glow. An added bonus was the discovery of the light-up page at the end of the book. The kids wondered how it worked, so we spent some time passing the book around and hypothesizing about the mechanics.

From there, I had prepared a short bio of Chappelle’s education and career, which led to a discussion about what an exobiologist might be, and of course, a dance party. After we settled down, we talked about bioluminescence, then watched a short video about its varied functions. 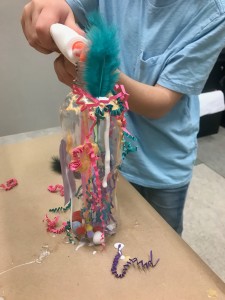 With the light of so many glowing creatures fresh in our minds, we moved over to the art room, in order to build our own bioluminescent critters. We provided a multitude of recyclable materials, random art supplies, and several glow sticks (I know, not really bioluminescent. Artistic license!). My art projects tend to be messy, and the kids get really creative. Their instructions were to use whatever materials they want, but to consider the function of their creatures’ light. Were they using it to attract friends? Attract prey? Intimidate predators?

As always, I was blown away by their creativity. And a little horrified by the clean up.