What do you call a chicken who crosses the road, rolls around in the dirt, then comes back?*

Alas, this particular joke went over the heads of every participant in this month’s STEAM Engines at Skokie Library, but it was the perfect entry into our discussion about dirt – or more specifically soil. Same thing, right? As it it turns out, there’s a difference, and if you ask a soil scientist, it’s pretty big! 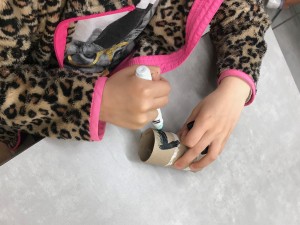 It was the beginning of summer, and I was getting excited about getting my hands dirty. What better opportunity than STEAM Engines, Skokie Library’s kindergarten-2nd grade science club, to get kids into making a mess? As always, we started with a book: Sam & Dave Dig a Hole is a favorite of mine. It’s funny, and it also illustrates in a completely goofy way the mysteries and riches that soil holds, sometimes just out of sight. 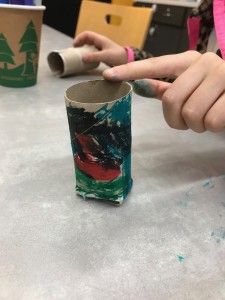 This was a nice jumping off point, and provided the perfect ground for talking about the difference between soil and earth. I wanted them to take away some really basic concepts: Soil is a mix of minerals, water, air, and organic material both living and…not. This was easily illustrated as Sam & Dave had just dug past worms and other creatures as well as dinosaur bones. I also wanted them to know that dirt is absolutely vital to life on earth — it’s what plants grow in! We can’t live without it.

Here we took a brief video break, as the good people of SciShow Kids reiterated my basic points. The video also provided an introduction to the concept of soil being made of layers. Each layer has a different color, texture, and chemical makeup. These layers are called horizons. Here I showed them a picture, and we glossed over the names of the layers (they had fun giggling about the humus/hummus – you do NOT want to eat one of them) and what their properties are. I say glossed, and I mean it because even though I am silly and I like to keep things moving, there is only so much talk ab 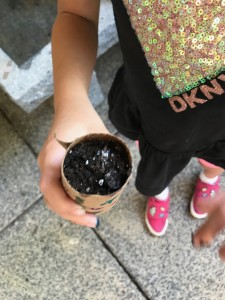 out soil that 5-7 year olds will tolerate.

This brought me to my closing point. Now we know what SOIL is, but what is DIRT?? Easy. Dirt is the stuff you track in the house that your grownup yells at you about. The stuff that gets under your fingernails. The stuff that ends up all over you after a really great day 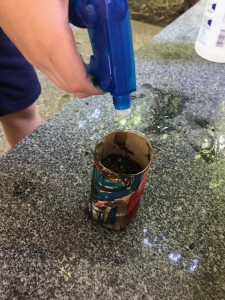 We closed out with a song, which we all agreed confused the issue a little (waitaminute — I thought that was SOIL!!) but we enjoyed it a lot, and agreed that there’s something to be said for creative license. From here, we took to the craft room where the kids made and decorated biodegradable pots (there are lots of ways to do this, but we used toilet paper tubes) which we then took outside to in order to do what soil does best: grow something! The kids measured out soil and carefully planted sunflower seeds which they took home to either plant outside, or monitor from inside. They left, pots in hand, happy and a bit dirtier than they arrived.

This was a fun program, but what made it extra gratifying was running into one of the attendees a bit later who gave me updates on the plant’s progress. She had experienced some foibles  both with over and under watering, and had started over a few times with her mom’s help. That made her eventual success that much sweeter, and was a nice way for me to tell her that this was awesome scientist work: gaining knowledge, trial, error, experimentation, and results! They have been keeping me updated throughout the summer when they see me at the library, and I thrill every time I see a new photo. 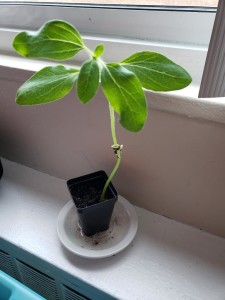