Multi-day activity camps made a reappearance at Skokie Public Library during the most recent school break. For 15 kids in grades 3-5, that meant an opportunity to learn the basics of coding with Ozobots and Ozoblockly in a three-day Robot Dance Boot Camp. The premise: spend two hours on each of three consecutive days learning the basics of coding, then apply that learning to create a program for the Ozobot to “dance” to a song. The central challenge was to choreograph a routine for the Ozobot, which is just a dance- and music-specific way of thinking about the challenge of writing a specific program. 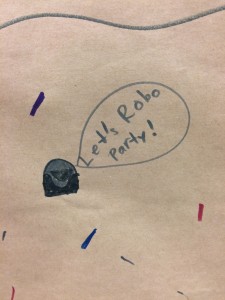 There were two staff running the boot camp each day, allowing us opportunities to really interact with the kids as they learned and experimented. Here’s a breakdown of what we covered on each day of the Robot Dance Boot Camp:

Day 1: As kids arrived at the room, we shared the premise of the program and the fact that everyone would be choreographing their Ozobots to the same song. We took this intro opportunity to do an ice breaker and ask kids to suggest a song that might work for the dance. The kids ultimately voted to go with Pharrell Williams’s “Happy” (which meant we got to enjoy the Despicable Me 2 soundtrack as background music during some of the camp’s work times). From there, we talked about what coding is and how it works, then segued into a Code the Teacher activity in which the kids had to give specific oral instructions (or code) to get one of the staff in the room to pick up a piece of paper and drop it in a recycling bin. Code the Teacher is a great tool for engaging kids in a live, full-scale experiment in how coding works best. Next we provided a general introduction to Ozoblockly, the coding platform we use with our Ozobots, by demoing the web-based interface on the large screen in the room. We specifically pointed out that users can code in one of five modes, including novice, beginner, intermediate, and advanced (we didn’t try master mode, as it was not yet live at the time of our camp)—allowing the kids to choose a mode that was just right for their level of knowledge and desired challenge. The last thing we did before handing out iPads with Ozoblockly queued up was demonstrate how to load the completed program onto an Ozobot. Then, once each kid had an iPad and an Ozobot, the rest of the session was spent in free group exploration, with kids trying out the code functions, learning to sync the programs to their Ozobots, and watching their code in action. There were lots of questions throughout this exploration time, which is to be expected.

Day 2: We played “Happy” as everyone was getting into the room and ready for the program. Then we kicked off with a more challenging Code the Teacher: this time, to get the teacher to pick up a cup, take it to the sink, fill it with water, and then drink. Kids typically think it’s going to be easy to give instructions to get the teacher to do something straightforward like drink some water, and it’s great to see them start to really comprehend how many specific, discrete actions go into even the simplest of human tasks. Next we once again handed out the iPads and Ozobots—we kept track of which kid used which iPad so that they could return to the code they had started the previous day. After a brief group recap of the major functions in Ozoblockly’s coding blocks, kids went to town writing their own codes again. They seemed to particularly enjoy experimenting with different displays of the Ozobots’ lights. We were pleasantly surprised at how quickly the kids became comfortable with this general challenge to choreograph a robot routine to “Happy”; they were so confident and efficient at using their new skills that we spent a good twenty minutes of the session demoing kids’ creations on the overhead screen. We also had a non-tech activity available for kids who were either done with their choreography or wanted a break: to use paper and markers to make backdrops and dance floors for their routines. Before we packed up for the end of Day 2, we reiterated the plan for the following final day, specifically that we’d “perform” the robot dance routines for families at the end of the final session. 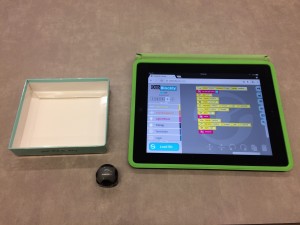 On Day 3, kids took up the challenge to program their Ozobots to explore the perimeter of a small box.

Day 3: We opened with the most complicated Code the Teacher we’ve done thus far in the library: to get the teacher to make a cup of instant coffee, which includes getting to the sink, getting exactly one cup of water, returning to a table, opening a jar of instant coffee, measuring a particular amount of instant coffee, and then stirring. This Code the Teacher challenge took a full 30 minutes, with kids really engaged the entire time as they tried to assist one another in constructing specific, discrete coding instructions to accomplish the task. Next, and because so many kids had said they were mostly done with the central robot dance challenge, we presented a mini challenge to kick off the tech part of the day. Each kid received a small box lid (about 6 inches by 6 inches), and all were given the challenge of writing code so that their Ozobots would explore the perimeters of their boxes. It was so interesting to watch the different ways in which the kids approached this challenge. Once that challenge was complete, we had about thirty minutes remaining before showtime—the robot dance recital for friends and family. Some of the kids used this time to finish designing their backdrops, while others added to and tweaked their code. We also asked kids to open up another tab in their browsers and to prepare a simple program that was mostly different light combinations; these light programs would be the grand finale after the recital. We added about 20 more people into the room for the recital, with each kid taking a turn at showing their robot’s dance projected onto our overhead screen for easy viewing. We emphasized to caregivers that most of the attendees created their programs despite having never used Ozobots before the boot camp. There were lots of impressed caregivers with their cell phone cameras out to capture the moment. Finally, we turned off the lights, pumped the music one last time, and had all of the kids activate their lights-only routines at the same time for a robot rave of sorts—a fun and silly way to wrap up the program. 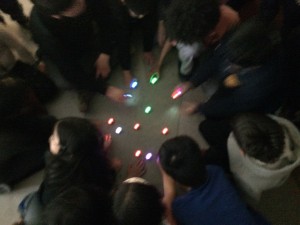 Ending the three-day boot camp with a robot rave.

Of our fifteen Robot Dance Boot Camp participants, all learned new coding skills in the program; 93% of the kids had never used the platform before at all. We saw several instances of kids helping one another troubleshoot their code and try to figure out cool robot dance moves using Ozoblockly. Interestingly, we also saw lots of kids gravitating toward storytelling when they wrote and shared their programs; they narrated stories about what their robots were doing, giving more concrete structure to what otherwise could have been just code without context. We had at least one participant place a hold on the Ozobot STEAM kit in the library’s collection so he could keep coding at home. These are all tremendous outcomes for a three-day coding program, and while we did realize that six total hours over three days was perhaps a bit long for a boot camp, this camp has inspired us to think about how we can engage more kids in coding programs in the future.

If you’re curious about other tech boot camps we’ve offered at Skokie Public Library, check out this post about the Scratch Jr. Code Camp for kindergarten through second graders that we offered this past winter.