Eggs and art.  Those are two words most people don’t often connect, unless it’s spring and one is thinking of Easter.  In the Ukraine, though, egg art is a centuries old tradition, and people design and decorate the eggs year-round, as well as collect and prize them as fine and treasured art. 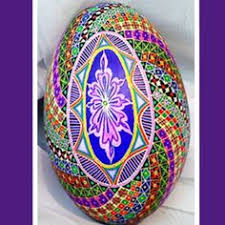 The word “Pysanky” comes from the Ukrainian word that means “to write.”  The term is used in relation to these beautiful eggs because they are not simply dyed in the way with which we are most familiar.  The intricate designs are drawn, or “written,” on them with beeswax in a long process of alternating drawing and dying in progressively darker dyes, until, after the darkest dye has been used, usually black, all the wax is melted off with a candle to reveal a myriad of colors and designs.  Each time wax is added, it protects the color it covers, which creates something of a wax-resist effect on the surface of the egg.  When the wax is melted off at the end of the process, each of the dye colors, plus the white of the egg is revealed. 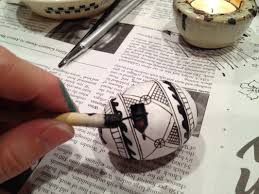 Here, an artist has already penciled a design on an egg, and is putting the  first layer of ax on to protect the original white of the eggshell. 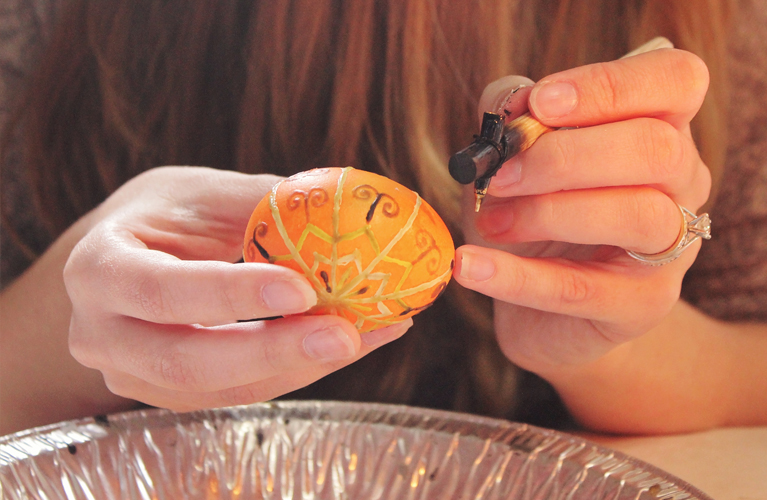 After the original layer of wax was applied, the egg was dipped in the lightest of the dyes to be used.  In this picture, the yellow and light orange dyes have already been used.  The artist is applying more wax before moving on to the next darker dye.

The original artist were forced to use a limited palette, due to being restricted to the dyes that  could be readily made from the available natural resources.  Today, there are many more colors available, but many artists restrict themselves to the colors that have been used for millenia.  Those colors are white, yellow, gold, red, green, and black Once all of the designs have been drawn and the egg has been soaked in each of the dyes, the next task is to remove all of the wax with a candle. 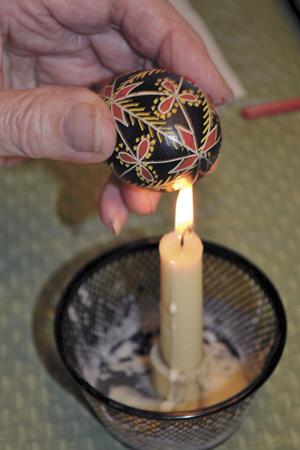 The tradition of Pysanky predates the Christian influence in the area of the Ukraine.  The original artists were those who practiced the original religions of the region – various forms of paganism.  The designs they drew on the raw, flawless eggs that would become Pysanky held symbolic meanings in their religion and related their mythology.   In 988 A.D., when the Ukrainian region accepted Christianity, the tradition and the symbols lived on.  Some of the symbols were just given new meanings.  For instance, the eggs were often shared and offered as gifts in the spring, when new life was all around.  After the people began practicing Christianity, the eggs became a symbol of resurrection.  The triangle which had before represented the cycle of life – birth, life, and death – became a symbol of the Trinity.  Other designs, though, have maintained their original symbolism.

This past week, after sharing Patricia Polacco’s wonderful book Rechenka’s Eggs, I gave my Crafternoon participants the opportunity to try their hands at creating simple Psanky style eggs.  We started with artificial eggs, to cut down on the breakage and mess that real, raw eggs would have caused in a room full of excited 4-11 year olds.  After showing them a PowerPoint presentation about how the traditional eggs are created, I showed them pictures of finished eggs that I’d found online.  On blank sheets of paper, they drew out designs for their eggs before receiving the eggs to draw on with pencils.  Once they had a design penciled onto their eggs, they used white crayons to cover over the parts that were to stay white.  When the dyes came out, we quickly discovered that, despite the assurances on the package labels, the dyes would not adhere to the artificial eggs.  No worries.  I nearly always have a backup plan.  There were packages of Sharpies waiting on the shelf.  The kids were delighted to get to use the Sharpies to fill in their designs.  In the end, the participants learned about a tradition from another culture that dates back thousands of years; they got to be creative and draw a design that they then transferred to a three dimensional surface; they got to use the treasured and oft off-limits Sharpies; and they had a great time at the library.  Everyone had a colorful egg to take home.  Some mothers even got in on the fun, helped their children, or created eggs of their own to take home.

For more information about the ancient tradition of Pysanky, the internet is a great resource.  A few sites of interest are:

A Brief History, Symbols and Colors of Pysanky:  http://graphicoriginals.com/history.html