On December 20, 2017, the General Assembly of the United Nations unanimously voted to declare May 20 World Bee Day.

Why should we celebrate bees?

The purpose of World Bee Day is to recognize more than just the most well-known of the bees – the European honey bee.  Many people don’t know that the honey bee isn’t native to North America.  It colonized the western hemisphere with the European settlers.  When the settlers arrived, though, this country already had plenty of bees of its own, some 4,000 different species actually, ranging in size from the world’s smallest bee, the solitary desert dwelling Perdita minima of the Southwest, to the comparatively gargantuan carpenter bees.  In fact, despite the fact that native bees pollinate most of the country’s crops and flowering plants, some 10% of North America’s bees haven’t even been named yet. 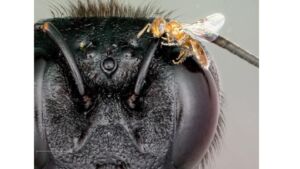 This is a photo of an adult Perdita minima standing on the eye of a female carpenter bee, taken by Stephen Buchmann.

These bees are so tiny that they fly right through the webbing of insect nets.  They are so small and elusive that it is very difficult for researchers to locate them, much less study them. For that reason, not much is known about these tiny little desert pollinators.

There’s another, much more serious reason to give bees their own special day.  They need some human TLC.  Like so many other animals and plants all over the Earth, bees everywhere are suffering due to human activity.  Of the more than 20,000 known species of bees on the planet, it’s reported that 10% are facing extinction, and another 5% are endangered.  What makes these figures even more concerning is that there is no information about an estimated 57% of bee species.  That’s an awful lot of bees that we know next to nothing about.  Ever since the issue came to the public eye with the massive honey bee die-off in 2004, U.S. beekeepers have noted declining numbers in their hives each year.  In 2017 alone U. S. keepers lost 33% of their bees.  There are several known reasons for the decline:

According to the USGS, one of the most important things we can do to help our native bees is to conserve and propagate all of our native flowering plants.  Many bees are so specialized that they depend on a few or even one single plant species for their species’ survival.

Now, why May 20?  One good reason is that May is recognized as the month of flowers, and bees love flowers. Another reason is that May 20 is the recognized birthday of Anton Jansa (1734-1773), who is considered to be one of the pioneers of modern beekeeping.  Although he started out studying art with his brothers, he decided to leave school and return to his family’s farm and devote his life to beekeeping and teaching others about it.  In 1770, when he was 36, Austrian Empress Maria Theresa appointed him the first permanent teacher of apiculture (beekeeping) in all the Austrian regions.  From then on Anton was in charge of the beehives in the royal gardens, and traveled throughout the country teaching people how to keep bees and harvest honey.  He even wrote two books about the subject which became textbooks for anyone studying apiculture.

To honor the bees, Leyla Torres, author of the website “Origami Spirit,” is offering an origami bee tutorial for people to try and share on her Facebook fan page.

There are lots of other origami and paper bee tutorials online, as well.  Here’s one from Green Schools Ireland.  Adriano Mariani demonstrates an interesting design here.  And for the adventurous potential paper bee keeper, check out the Origami Resource Center (one of my favorite resources), which offers an easy bee, a fun pattern from Origami Club, and a real challenge by Marc Kirschenbaum. (I’m working on this one now, but it may take a while – it has over 100 steps!)

For my celebration of World Bee Day, I dug through my recycling box for supplies, and then made a mobile using a plastic steamer tray from a microwave meal, some sales catalog pages cut into squares, some envelopes I opened out and cut into squares, some brown shipping paper, string, and tape, as well as markers for decoration. 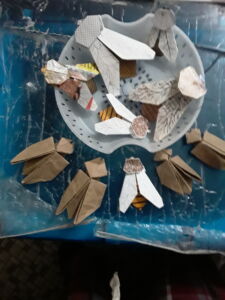 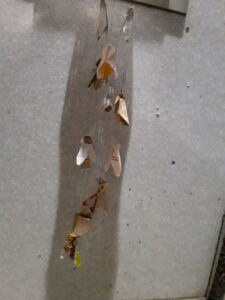 Not too bad, if I do say so myself!

So, if you’re out and about and see a bee on a flower, let her have first dibs. She has a family to help feed.