Our library is hosting the Explore Space: A Cosmic Journey exhibit* for the next two months, and as part of this special exhibit we have lined up several space-themed STEAM programs for youth in grades K-5. One of our first programs took place before the exhibit’s opening: a challenge-based family program where the goal was to build a model of the International Space Station using cardboard boxes and other on-hand materials. We were inspired to host this program after seeing cardboard construction activities at other libraries, and we adapted the concept to our community. Here’s what we did.

Starting in June, we began collecting cardboard boxes—a lot of cardboard boxes, of varying sizes. We originally envisioned participants being able to move through the ISS model they created, so we made sure we had some larger boxes on hand.

In the program, we started off by talking about what the ISS is, how it was constructed, and what happens there. We used this animation video to show how the ISS was built, then talked about what some of the modules are used for and how important team work was in building something so extraordinary. After this video, participants’ attention returned to their tables. Each table had a printout image of the ISS showing its width compared to a football field as well as this Facts and Figures document from NASA. These handouts helped participants to understand the different components and modules of the ISS and to try to grasp how big it really is. 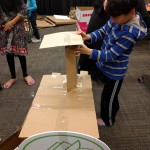 We then moved on to discuss the terms “scale” and “model.” We provided examples, including one about building a dollhouse, to help the younger participants understand these concepts. This provided a natural transition to how we were making a model of the ISS at a much smaller scale than the real thing. Each table of participants was assigned the task of constructing scale examples of the different modules or components of the ISS, using handouts from this resource as their guide. The handouts provided a visual for participants to work off of as well as further information about the function of each component in the context of the overall ISS.

As participants worked in family groups to complete their assigned modules, they had the option to take on additional assignments or add flair to their creations with markers. Some participants were very interested in getting the details of their miniature ISS modules right, while others were set on making sure kids could fit inside their module and decorating their creations. Adult caregivers were amazing in helping build their children’s visions. 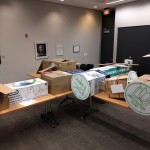 Completed modules were placed together on top of tables since we only had one module that could accommodate children crawling inside. Our original plan for a child-size ISS play space didn’t come to fruition, but the final cardboard model we created didn’t disappoint.

We ended the program by asking participants to show off their contributions and share a bit about their building experience, like what they liked most and what they found challenging. We also played Chris Hadfield’s video cover of “Space Odyssey”—filmed on the real ISS!—as participants looked at the completed model and made their way out of the program room.

*Explore Space: A Cosmic Journey is a traveling exhibition for libraries that includes informative panels, an interactive kiosk, and hands-on resources. The exhibition is part of the STAR Library Education Network led by the National Center for Interactive Learning at the Space Science Institute. Exhibit partners include the American Library Association, the Lunar and Planetary Institute, and Afterschool Alliance. Explore Space is supported through a grant from the National Science Foundation.