For the last week of our Depot Days programs in the park, I wanted to do some astronomy related things. This gave me an excellent opportunity to distribute Moore Foundation eclipse glasses to those in attendance, with instructions for proper use. But these programs took place at 10:30 am, outside. So, how to address the eclipse and other astronomy topics with a large group of elementary-age and younger kids, with the distractions of the playground and frequently passing trains? On Tuesday, it was sunny and perfect weather for outdoor events. Thursday was gloomy and threatening rain, but we still had a full house. The eclipse viewing glasses were a huge draw. 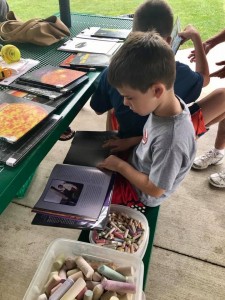 First, as usual, we started with some stories. We shared the books If You Decide to Go To the Moon, by Faith McNulty, and Interstellar Cinderella, by Deborah Underwood. We had lots of solar system, moon, and sun books available to read on-site as well.

Some of the sunny day activities included mapping out the relative distances of the planets in our solar system. Since 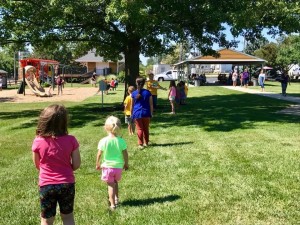 the park has a large open space, this worked very well. Volunteers were selected to represent the sun and each of the planets, as well as some 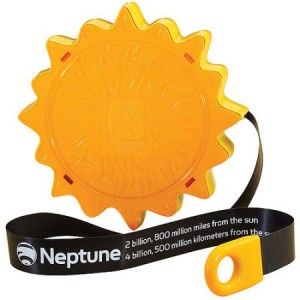 asteroids, random comets, and other celestial bodies. I have a tape measure which gives accurate relative distances, and I had each of the kids chosen to play the planets simply stand and hold their respective spots on the tape while we measured it out in the field. The tape measure case looks like the sun, and the solar system bodies line out to Neptune at the end of the tape. It can be purchased, among other places, through Amazon.com here: https://www.amazon.com/Educational-Insights-Solar-System-Mapping/dp/B0074A45KU

We talked about how an eclipse works, making use of a poster image of the sun and black construction paper cut in a 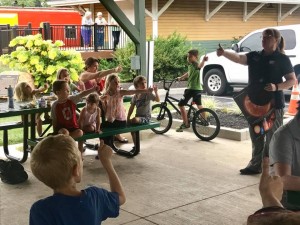 circle the right size to cover all of the sun’s image except the corona. We talked about what the corona is, and why it’s visible during the total solar eclipse. We also talked about how the relatively tiny moon can cover the huge sun. To help understand the relative size/distances of the sun, moon, and Earth, I had everyone hold up a thumb at arm’s length from their faces, squint, and look at me past their thumbs. I asked whether they could see any of me, all of me, or just part of my head past their thumbs. We then repeated this exercise looking at a much closer neighbor. We repeated again with thumbs closer to eyes, and discussed the differences. It was actually fun for both the kids and the adults! 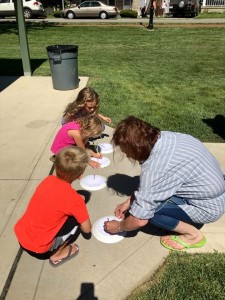 Since it was sunny on Tuesday, we used that day to create sundial clocks using 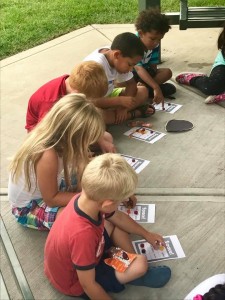 paper plates, printed clock faces, and drinking straws. It was a relatively simple craft, but they had a lot of fun trying to figure out how to line their sundials up properly to get an accurate time reading. We also played a game of Solar System Bingo, using gummy snacks as bingo markers. I had a bunch of wrist bands and a few pins left from the NASA Orion test launch in December of 2014, and I handed those out as Bingo prizes. Anyone who didn’t want to make a sundial was welcome to play bingo instead… a few played bingo and then hurried back to create sundials also.

Additionally, we created Constellation Key Chains, utilizing circles of cardboard with holes punched in them to represent five of the best-known northern hemisphere constellations. Students were encouraged to draw the lines between the “stars” to help visualize the constellations. When held in the sunlight, the constellation is created by the shadows and light on a sidewalk or other surface. A flashlight can accomplish the same effect inside. At night, they can be used to help identify some of the constellations in the sky. 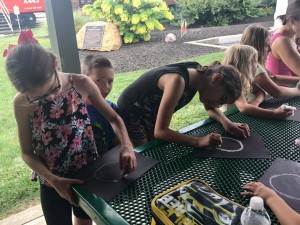 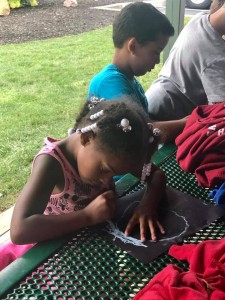 paper and chalk. I asked the kids to draw a large circle on their paper, then color around the outside of the circle only, representing the sun’s corona visible around the eclipsed sun.

Using the Yard Stick Eclipse demonstration from the Night Sky Network, we also added a flashlight to talk about how lunar and solar eclipses differ. https://nightsky.jpl.nasa.gov/download-view.cfm?Doc_ID=327

I had taken the library’s telescope with me to the park on Tuesday, but decided against getting it out at the end of the program due to the very large number of small kids, the fact that I didn’t have a solar filter with me, and the general rambunctiousness of the crowd. At the very end, when there were only a few older kids remaining, I set up the telescope under the shelter roof to allow them to look at the telescope itself and learn about how it works. We then looked at leaves on trees that are across the rail tracks and quite a long way away from the park to talk about how the magnification and mirrors work.

Finally, we handed out eclipse viewing glasses at the end of the programs both on Tuesday and Thursday; and gave instructions for proper viewing in our 93% coverage location. Some who attended the program did so solely to obtain the glasses, but I had made it clear at the beginning of the program that glasses would only be handed out at the end of the program. I think we successfully covered a number of astronomical topics, and we shared viewing safety information and glasses for the eclipse as well, proving that you can do outdoor, day-time astronomy programs without the use of a telescope!