The Science of Watersheds and Watershed Moments

A few weeks ago, I was asked if I would be available and willing to help with a program for the local Boys & Girls Club. The friend who asked is a fellow Environmental Educator, and the Parks and Recreation Manager for the city of Covington, KY. She had been contacted by an employee of the Boys and Girls Club about providing STEM programs specifically related to pollution and trash and where they “end up.” I agreed to help with the program as much as a favor for a friend as because I wanted to help provide the program.

The program was last week. As it turned out, my friend was not able to be part of the program. Someone else (Erin, with whom I have worked on other activities in the past) from her office would co-lead the program instead. Although Erin and I knew each other, we had not worked together directly in the past, and we talked as we set up about what expectations we each had for the program. Neither of us was sure how much enthusiasm the kids might have for the topic, but we were hopeful. Erin brought a watershed model for her portion of the program, and I would be providing leadership for an activity from the Project WET guide, titled Sum of the Parts. (An older version of the Sum of the Parts activity can be found here:

The watershed model Erin used is called an Enviroscape, and it uses such common things as tiny paper scraps, food sprinkles, colored sugar, and chocolate drink powder and sauce as a hands-on way to teach the concepts of point source and non-point source pollution. More information on the Enviroscape can be found here:

Local agencies, including sustainability offices at universities, Parks and Recreation departments, and university extension offices, often have Enviroscape models available; either to lend or to send with staff for programming. 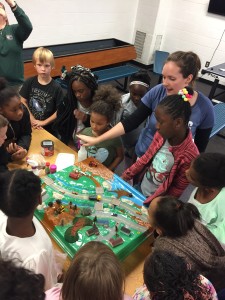 The Enviroscape Erin brought includes representations of a neighborhood, farmland, a construction site, a factory, a mountain that has been denuded of vegetation, and roads and bridges. At one edge, there is also the representation of a lake, which is topographically lower than the rest of the model. With the Enviroscape, surface effects of the various parts of the model on rain water run-off are discussed. What happens, for example, to the surface dirt on the mountain that no longer has trees on it? By sprinkling chocolate drink mix on the model, then using a spray bottle and water, the effect of erosion and rain run-off on the lake is demonstrated; “dirt” from the mountainside is washed into the stream and then flows into the lake. Tiny colored bits of paper sprinkled through the neighborhood simulate trash, and a similar thing happens when it “rains” and the some of the trash ends up in the lake as well. Chocolate sauce on the model of the factory flows through a “pipe” and directly into a stream, simulating hazardous dumping. Green sugar on the golf course model runs into the stream after it “rains” and provides an example of what fertilizers and pesticides can do in heavy rain, further polluting the stream and lake.

After a variety of similar examples, the students were led in a discussion of the concepts of point-source (you can “point to a source”) pollution – things like the run-off from the bare mountainside; and non-point source (you can’t say for sure which point is the source) pollution- like the trash which ends up in the lake from the neighborhood, where you can’t determine exactly from which house the trash 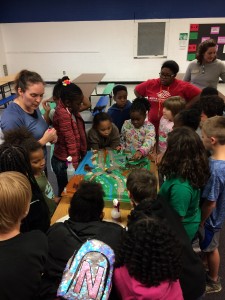 originated, or oil washed off the roadway into the stream. This is a somewhat tricky concept, even for adults at times. And yet, the 8 and 9-year olds we were working with seemed to get it without any trouble. They had been doing some lessons prior to our visit about pollution and the Enviroscape helped to really solidify the concepts for them. They also found it fun, and were extremely engaged in the topic. When Erin asked about trash in their neighborhoods and on city streets, they understood that while it often washed down the sewer drains, that also meant that some of that trash ended up in the nearby Ohio and Licking Rivers, which border and run through the city of Covington. Further discussion indicated that they understood the negative environmental impacts that trash and pollution in the river (and lake, on the model) could have; not only on people, but on wildlife and the environment in general.

After the Enviroscape demonstration and discussion, we moved on to the Sum of the Parts activity. The students were each given an 11×18 sheet of paper, each of which had a blue wavy section marked at one end and a number in one corner. They were given the instructions that the blank part of the paper represented land which had been gifted to them, 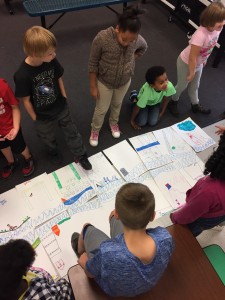 and they also had received a million dollars with which to do whatever they wished on their land. They were then given markers and some time to draw. Some created large houses, one drew a zoo. One drew gardens along the edge of the blue part of the paper. Their instructions said they could build, create, develop, plant, or whatever they chose on their land. After some time for drawing, the students were instructed to match the numbers on their pages, and to line them up edge to edge so that the blue parts of the paper formed a “river” along the center of the pieces of property. So, with the blue in the center, there was a pair of “1” sheets end-to-end, then a pair of “2” sheets end-to-end right next to the “1s,” and so on; connecting the pieces of land on either side of a river. In the discussion we then talked about the kinds of pollution each of those pieces of property might create that would affect the river, and how the pollution at one end of the river would affect the properties next to them and at the other end of the river.

In order to further demonstrate this concept, the students were asked to line up against a wall. Each was given a small item from my desk- a paperclip, business card, marker, rubber band, etc. It was explained that they were 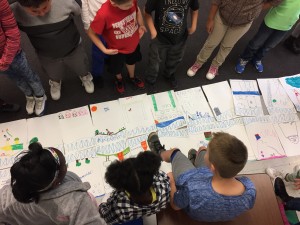 pieces of property along the river, and that their items were “pollution” flowing into the river. They were then instructed to hand their items “downriver” with student 1 handing her item to student 2. Student 2 then handed both items to student 3, who passed all three on, and so on. Eventually, the items had to be piled on a table, as the students could no longer hold and pass all the collected items along the river. This was used to demonstrate the cumulative affect of pollution; each student only contributed a small item, but it quickly added up to an unmanageable amount to hold. The students had a lot of fun with this, but also had serious discussion about the rapid way very small contributions to the problem became a very large problem. 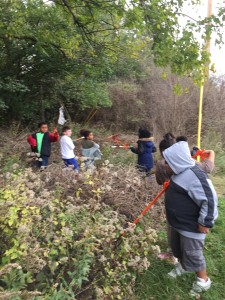 As a final piece to this puzzle, we then took the students outside onto the Club property to collect trash. Erin brought “pickers”- long-handled trigger-activated tools for picking up trash without touching it. Students were gloved for safety, given pickers if they wanted them (as soon as they saw what they were, they ALL wanted them!) and several adults accompanied them with trash bags in hand. This was the main part of the program in which I expected no enthusiasm from the kids; I am very happy to report I was wrong about that! We spent the better part of an hour outside, picking up small bits of trash and depositing them into the bags- nearly filling five trash bags by the end of the hour! The students ran to various places in an impromptu competition to be the ones to pick up the trash. They ranged all over the Club property, with us adults tagging along, using their pickers to clean up everything from cellophane food packaging to cigarette butts.

As we were headed down the rather steep hill behind the building to begin the trash collecting, one of the boys said to me, “I’m really surprised you guys walked down the hill with us.” That gave me pause. The “watershed moment” for me came when, as we were heading back into the building after collecting the trash, another of the boys announced he planned to “ask for a picker for Christmas,” so he could “always pick up the trash” in his neighborhood. Not only were these students attentive and involved with what seemed to me like an unexciting topic for them; they were inspired by the idea that they could each do something small that would help to make a difference in their environment; for themselves, for others, for wildlife, and for the planet. I was reminded yet again that we never know what a difference any given program might make… if even to a single kid. And that the cumulative effect of those programs might be even greater than we realize. That was proof, to me and to Erin and the Club staff, that the kids “get it” and there is hope for the future.

I can’t wait to go back and work with them again.