This week, as part of my Summer Reading Depot Days programs in the park series, we addressed geology; and it rocked! As usual we began the program with some good books, including

A Rock is Lively, by Dianna Hutts Aston, and Earthshake: Poems From The Ground Up, by Lisa Westberg Peters. A Rock is Lively gave us lots of good geology vocabulary, including discussion of sedimentary, igneous, and metamorphic rock, and the rock cycle. It talked about minerals, fossils, and more. Poetry from

Earthshake included such concepts as the layers found within the earth, and reiterated about fossils, minerals, and the rock cycle itself.

After the reading, we talked briefly about how minerals are often mined from the ground, and asked what kinds of things one might obtain by mining. Each child was then given a paper plate with a single chocolate chip cookie and two toothpicks. With instructions that the toothpicks were their mining tools, and that the chips were “chocolate diamonds,” they were asked to see how many complete diamonds they could mine from their pieces of earth. It became quite the competition between siblings, and even the youngest found themselves working hard to mine as many diamonds as possible! 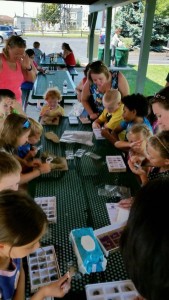 After this whole-group activity, there were two different smaller group activities available. In the interest of both

time and ease of facilitation, I split the group so that half would be in the shelter with one project while the other half headed outside for the other. Under the shelter roof, we had fossil, mineral, and rock kits set out; plus some fossil-rich rocks from my yard, a few loose fossils, assorted loose small rocks, crystals, pieces of geodes, and magnifying glasses. Kids were encouraged to use the magnifying glasses to inspect the various rock samples, compare them, share with their neighbors. There are several large memorial and signage rocks in the park, and they were encouraged to go take a look at them with the magnifying glasses also. While the first group was busy with this, the second group prepared to break geodes. As kids finished with their geode breaking, the groups switched out; giving everyone the chance to do both things by the end of the program.

The geode group lined up along the sidewalk, received a paper lunch bag and whole geode each, and were instructed to kneel in the grass along the two sides of the sidewalk. I had scavenged for hammers at 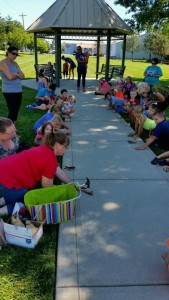 home, coming up with about 7 hammers, so it was explained that they would need to work in groups and take turns using the hammers. The geodes, which were labeled as having come from Morocco, were on average about 1.5 inches in diameter. Everyone was instructed to put their geodes in the bottom of their bags, folding them over and over to make packets around the geodes, and then wait for a turn with a hammer. I demonstrated the proper way to “tap” the geode with the hammer, rather than smashing it to smithereens… then showed some of what they might expect to find inside. I cautioned that geodes are natural things and I couldn’t guarantee what they would find inside them all, but we were not disappointed. All the geodes broke to reveal beautiful and sparkling white 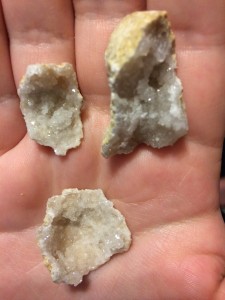 crystals! Some were more dense inside than others, but all broke well and the kids all went home happy. Fortunately, I had extra paper bags on hand so that the broken geode pieces could be transported home safely. Most instructions will tell you to place your geodes inside old socks for smashing, but the paper bags worked just fine. I would also recommend that this be done while wearing safety goggles, but I neglected to remember to pack ours with the other supplies when I went to the park. We had no issues, however, with either any smashed fingers or any other mishaps of any kind. 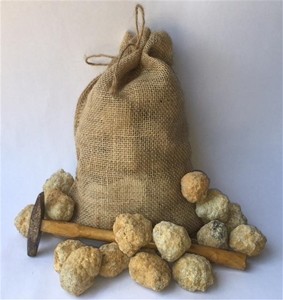 The geodes were purchased online through the Store for Knowledge, http://www.storeforknowledge.com/40-Break-Your-Own-Geodes-Crystals-Bulk-Pack-Whole-Moroccan-15-P19361.aspx?gclid=CNza85qY1dQCFQgGaQod8XIIuA. After reading a lot of reviews, I decided on those which seemed to have the highest rate of finding crystals inside, rather than necessarily the least expensive. I ordered a total of 80 (2 sets) and was not diappointed.

The mineral and rock kits I already had on hand. They had been previously purchased from Amazon, and can be found here:

It was a fun and well-received program and several kids were in the library the next day looking for rock, mineral and fossil books. At the end of the program, a number of kids told me how cool it was, and how much fun they had. A bunch of the kids had to show me the crystals they found inside their geodes. The consensus was that geology rocks!