What exactly is a penumbral  lunar eclipse? We recently had the good fortune to be able to explore this in a library program. In a rare event, several circumstances aligned to allow us the opportunity to talk about eclipses, view one as it happened, and help build excitement for the upcoming solar eclipse.

Even though Friday evening programs are not typically well-attended, this was a program that really piqued the public’s interest! 75 people of a wide range of ages attended the event to learn about the eclipse, practice some “hands-on eclipse-making,” and view the eclipse through the library’s telescope. We also used the opportunity to highlight the library’s new collection of circulating telescopes.

It often happens that the weather does not cooperate when we have planned viewing programs. It has frequently been too cloudy for any kind of telescope viewing. While enough indoor activities are always planned to provide a complete program if we are not able to take the telescope out, it is always disappointing to those who attend when that is the case. Fortunately on Feb. 10, the weather did cooperate, giving us a good if occasionally partially obscured view of the full snow moon and the eclipse in progress.

We began the program with a story for the youngest in the audience. The book The Sun and the Moon, by Carolyn Cinami DiCristofano was a good starting point. 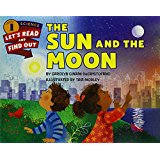 This simple yet factually accurate book discusses basic differences of the moon and sun, and similarities in how they interact with the earth. It was an excellent jumping-off point for discussion of the basics of the earth’s orbit around the sun, the moon’s orbit around the earth, and how the two interact with each other. It was at this point that all kids were asked to stand and pretend they were various celestial bodies. One student was recruited to be the “sun,” and asked to stand in the center of the space. The other kids were directed to spin slowly in place, while thinking about how light would reach them from the sun, were she giving off light in all directions. The celestial bodies were then instructed to also move slowly around the sun, simulating an orbit. After giving them a few minutes to ponder the effects of the light from the sun with this added dimension, all movement was stopped and one “earth” and one “moon” selected to interact with the “sun.” The whole process was repeated, with just the three, to explain how the moon passes through the shadow of the earth, (a lunar eclipse) and how the earth passes through the moon’s shadow (a solar eclipse) at other times. Once the concept seemed to be making sense, we settled back down to watch the following video on the wall screen, to solidify the concept for both the kids and the adults present.

This video, Lunar Eclipse Essentials/NASA Planetary Sciences, is a good brief introduction to what makes an eclipse happen, and the differences between an Umbral eclipse and a Penumbral eclipse. We watched the video without any commentary from me once, then went back through and paused it for some brief discussion about the umbra and penumbra. Explaining that “umbra” means shadow, and “pen” means almost, it was made clearer that the penumbra is “almost the shadow” of the earth. Once we had a good grasp on that, it was time to move on to the model-making!

Using the simple materials of styrofoam balls of two sizes, aluminum foil, toilet paper tubes, card stock, and some wire, we created working models of how an eclipse works. Small flashlights were handed out once the models were completed, for everyone to practice making shadows on their models to simulate both lunar and solar eclipses. 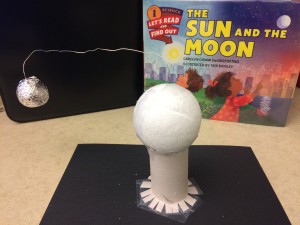 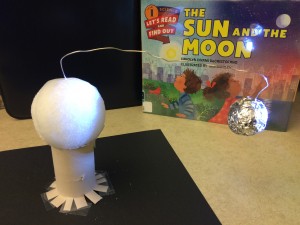 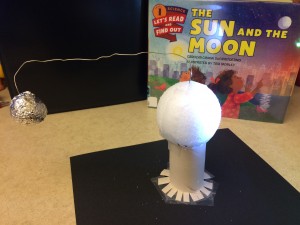 Using the larger (roughly orange-sized) ball to represent the earth, and the smaller (roughly ping-pong ball-sized) ball to represent the moon, this model allows for the moon to rotate around the earth in an “orbit” while the flashlight sun provides illumination. Wrapping the “moon” in aluminum foil helps to differentiate the two and makes the concept of reflected light being the illumination for the moon a little easier to grasp. Families were asked to make one model per family, to both conserve materials and to reduce the amount of time this step would take. Even the adults who attended without children were engaged in the model making, working with families seated near them to provide the sun/moon/earth interaction.

While everyone was finishing up with their models, staff introduced the new circulating telescopes to those in attendance. Our Friends of the Library organization purchased two telescopes with accessories kits for each of our three branches to circulate. These telescopes are actually smaller versions of the programming telescope the library owns, and come with two eye-pieces, a Barlow lens, a moon filter, several charts and booklets (including an instruction manual), and a red light, contained in a zippered bag. The telescopes themselves are table-top size, and easily transportable.

While other staff was discussing the circulating telescopes, I used the time to set up the big telescope outside for moon viewing. Fortunately, there were a few clouds, but not enough to totally obscure our view. As it was, it actually made for more interesting viewing. Once the telescope was set up outside and ready for viewing, attendees were lead outside and lined up along the sidewalk in front of the building for a view of the moon in the process of the penumbral eclipse happening!