Host a BioBlitz at the Library 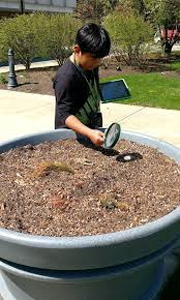 BioBlitz participant examining a planter with a magnifying glass.

As part of Earth Day celebrations, the Skokie Public Library hosted a BioBlitz, inspired by the annual event of the same name coordinated by National Geographic. A BioBlitz is a survey of a defined geographical area in an attempt to inventory all the species (animals, plants, bugs, etc.) in that area in a set, short amount of time. Everything living counts and is counted in a BioBlitz, and in the end, we have a biodiversity data snapshot of a given place at a given time.

National Geographic hosts 24 hour BioBlitzes in national parks once per year. The public is welcome to participate in these formal National Geographic events, but for folks who can’t, anyone can create their own BioBlitz in a schoolyard, backyard, or, as in our case, on public green space. National Geographic offers independent BioBlitzers tools like a field observation guide to help identify species. BioBlitzes also use the iNaturalist mobile and web-based application to document all found species. When users follow protocol for collecting data through the app, that collected data becomes usable scientific data–data professional scientists can use on its own or as part of National Geographic’s annual event.

Here’s how we incorporated the BioBlitz in our community.

We facilitated a 2 hour event that coincided with an Earth Day craft on a Saturday afternoon. The BioBlitz occurred on the Village Green, an open space between the library and Village Hall, and was open to all ages. We recruited a local MIT alumni group as volunteers to help participants find, photograph, and classify all living things in defined area using iNaturalist, which we had loaded on several iPads. In addition to the app, we provided BioBlitzers with binoculars, magnifying glasses, and tree and bug finders by Fandex Family Field Guides.

As members of our community came outside to participate in the BioBlitz, our volunteers helped spark conversations about biodiversity, the environment at large, and personal interests in the sciences. Participants ranged from preschoolers through middle schoolers, plus a handful of adults whose interest was piqued by the activity on their way into or out of the library. 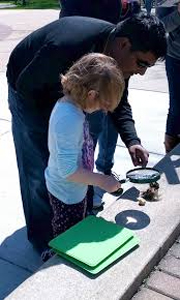 A future outdoor scientist observes plants outside the library.

While the WiFi connection wasn’t great at our BioBlitz location, we did have positive responses from the 35 participants. All were eager to find and take photos of interesting species they might not have noticed without stopping to look closer for the BioBlitz. One preschool participant started a collection of all the things she found, including a few pine cones, a dandelion, and a nut shell. She excitedly exclaimed that she wanted to be an “outdoor scientist”!

There’s still time to organize your own local BioBlitz to align with National Geographic’s May 20th nationwide event. Or, if that date isn’t optimal for you and your audience, plan a standalone event with community partners like the Park District, a local school, or a college or alumni group. Get to know the biodiversity around you with a BioBlitz!