A Whale of an Adventure!

seasonal movement of animals from one region to another. “this butterfly’s annual migration across North America”

We recently addressed the topic of migration in a program, and it was a lot of fun. First, I asked the kids what it means to “migrate.” They came up with a very similar answer to the definition above. I asked what kinds of things migrate; they told me fish, birds, butterflies, bugs, “things that live in Africa.” I asked if people migrate, and they all said no… but then thought about it a little more. One or two of them said “maybe.” We talked about people who go to Florida for the winter, then come back north for the summer, and decided that yes, people migrate too. This caused a lot of chuckles, but it made a good segue into the reading.

We started with the book Amazing Animal Journeys, by Chris Packham, illustrated by Jason Cockcroft. This is a new book in our library, and I like it a lot. It is information-dense without being a difficult read. The illustrations make it very engaging and accessible. It mentions a variety of animals that migrate, from blue whales to jelly fish to butterflies. Because I already had it and because Monarchs are specifically mentioned in the book, I set out my model of the life cycle of the Monarch butterfly with the book display. Sea Turtles are also included in this book, so that made a good lead-in to the next title.

The Green Sea Turtle, by Isabel Muller, was second. This is another information-rich non-fiction book with engaging

illustrations. It follows the life of a green sea turtle from hatching in the sand through the laying of her own eggs on the same beach, nearly 20 years later. To supplement this title, I had a model of life stages of the green sea turtle,

and a larger individual model of a sea turtle. And since the turtle in the book encounters a humpback whale, that made yet another great segue into our final book.

Here Come the Humpbacks!, by April Pulley Sayre, illustrated by Jamie Hogan, tells the story of a humpback whale calf’s first year. Each spread is beautifully illustrated in rich colors; the text includes additional facts to supplement the main body of the text. The information is presented in an easy-to-read, story-like format. The kids were very engaged with the story of the whale calf, even after already having read two other books. The whale calf and its mother 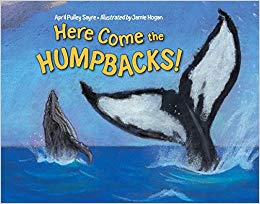 encounter both dangers and benefits on their migration from the southern calving seas to Stellwagen Bank on the north eastern coast of the United States. While I regrettably have no whale models that I could bring in for the program, I did print out some photos of humpback whales and their calves. I slid several into sheet protectors for repeated use; and glued one to a piece of 8.5 x 11” foam-core board I had on hand. It made a great visual aid and marker for the final station in the game we played next.

After reading the books, we played a game in which the kids pretended to be whale calves, making their first migration. The activity was developed by Curious City DPW, and is available for free here: http://www.curiouscitydpw.com/2013/07/19/humpbacks-migration-game/. The game was designed to lead students through the journey of the calf as documented in the book Here Come the Humpbacks, reinforcing the lessons in the book; the stations of the game use illustrations from the book as well. 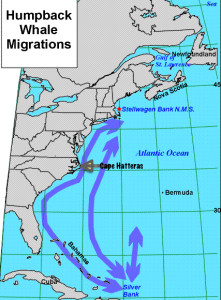 during their migration north to their summering location. The journey begins with the birth of the calf. Each child is 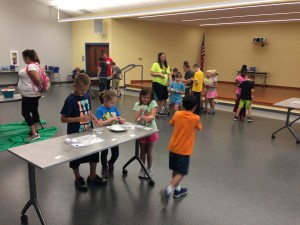 given a card with instructions for beginning the journey. At each successive station, there is an activity to complete, after which a new card is collected. Each card includes a short piece of information related to the journey; and reproduces a specific mention/illustration in the book. By the end of the journey, the whales have drunk mother’s milk, learned about blowing bubbles, encountered orcas, crossed paths with shipping lanes and tourists, and more. The final card in the game provides the students with information about symbolically adopting a whale, and suggestions for finding more information.

While the game is designed for a classroom or group of similar size, it worked quite well in my program of 35 with a 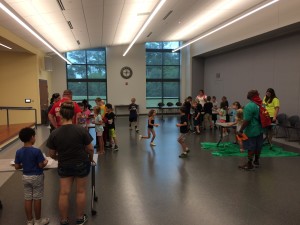 few minor adjustments. Instead of offering cartons of milk and fish crackers to eat, I simply printed out images of milk cartons and schools of fish. The students collected these along with their instruction cards. I did have an actual compass and a small pair of binoculars for the appropriate stations, along with bubbles for blowing at the spouting station, and stickers to represent remoras and barnacles hitching rides. I copied all the cards onto card stock; and asked the students to leave their collected cards in a basket at the last station in exchange for the final card with the whale adoption information. (One option can be found here.) Since I used printed images of milk and fish, I kept those as well, and will be able to re-use the materials for future programs.

I have used a similar migration game in the past based on the experiences of birds. The bird version of the game I

have used requires a little more in the way of reading; and I have found works best for an upper elementary or slightly older group. It can be found here: http://www.birdday.org/pdf/migrationgame.pdf

I have also played a similar game that follows deer through a migratory year. The Deer version of the game which I have played was loosely adapted from an activity found in Project WILD. (http://www.projectwild.org/)

This whale version worked well for the lower-elementary aged group in my program. Something similar could be created for monarch butterflies, as well, or nearly any other animal with recognizable migration patterns. Adapting the concept would be simple… but adaptations is a different program!  🙂

In the end, it was a whale of an adventure! 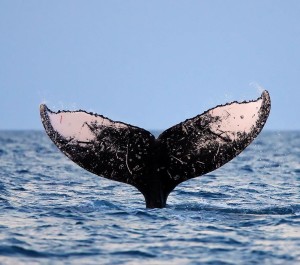