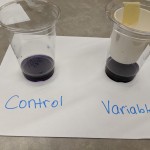 This month’s Be the Scientist program for grades 3-5 focused on a single experiment about ocean acidification. It’s been a little while since we provided a more STEM based program where everyone follows along with specific instructions, but we see the value in exposing youth patrons to the scientific method while also including room for processing observations and debriefing the activity to really drive home specific concepts. Here’s what we did.

We started off in true Be the Scientist fashion with a short slide show that welcomed information sharing about oceans and climate change from participants. We also included a video from National Geographic about oceans for more foundational information. Because the program’s experiment was based in chemistry, we also talked briefly about acidification of oceans and what the impact is. We used ourselves as an example, talking about what happens when we have too much of a food or not enough water to help participants understand the concept a bit better. 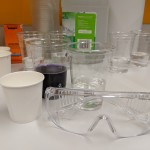 From here, we introduced the challenge: an experiment from Exploratorium’s Science Snacks called “Ocean Acidification in a Cup”. We talked through the experiment, including all the materials. This experiment has a video demonstration, which we could have used if steps or concepts were not understood. We also opted to use a cabbage juice indicator instead of diluted bromothymol blue and still provided safety goggles for participants.

Participants worked in pairs or small groups and staff facilitators ensured everyone was able to participate in the experiment to their comfort levels. When the experiment progressed, we asked guiding questions about what participants were observing. We then concluded the program by talking about what their observations mean in a larger context.

The Exploratorium’s activity guide was really helpful in providing guiding questions as well as explanations about the science. While this one was a little challenging for participants, they still enjoyed the experiment and asked a lot of follow up questions, which led facilitators to connect them with additional resources in the library for further inquiry.