April was a good time for Astronomy programs, with the Lyrid Meteor Shower on Earth Day this year. We held two different programs in anticipation of the shower; one in the library, and one in a local county park.

The program Meet a Meteor began with some meteor basics, including this “What’s Up in April” video from NASA.

A second video, specifically about the 2015 Lyrid meteor shower, was shared as well. Even though it is an older video, it references Earth Day and includes a good description of what a meteor shower is. The Earth Day Meteor Shower video can be found here: https://youtu.be/_rNmmHXEdTc 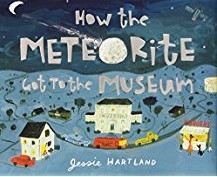 Lyrids, I shared a book, How the Meteorite Got to the Museum, by Jessie Hartland. This amusingly illustrated title tells the story of the famous Peekskill Meteorite, and how it ended up in a museum display. The story is told in an entertaining, cumulative narrative, but it also shares the basic facts of the meteorite and its journey.

A number of both fiction and non-fiction books about meteors were available for check-out, including 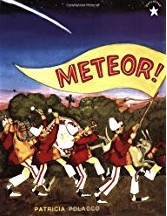 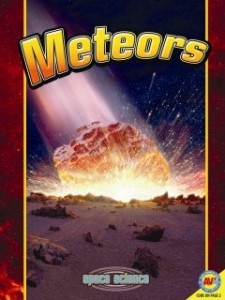 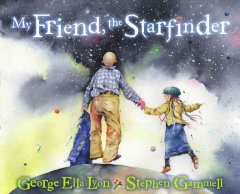 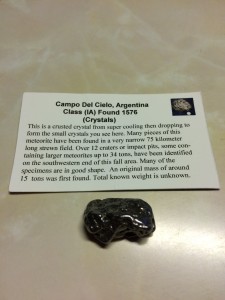 Following the reading of How the Meteorite Got to the Museum, I shared the meteorite I own, passing it around so that everyone had a chance to touch an actual meteorite. We talked a bit about different types of meteorites, and why this very small meteorite (the card in the image is business card-sized) is so very heavy for its size. We then talked about what meteors and meteorites do when they hit the earth, or what they might do if they hit the moon.

By adapting this activity: https://www.scientificamerican.com/article/make-craters-with-mini-meteors-bring-science-home/we learned about impact craters, ejecta, and more. Instead of cocoa powder for our top layer, we used glitter, 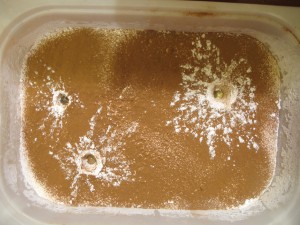 as that was something we had on-hand. We tried using “meteors” of a variety of sizes and shapes, including marbles, ping-pong balls, small rocks, pom-pons, and more. We compared the results of the various sizes and weights of “meteors” and talked about what the surface of the moon looks like through the telescope or binoculars. We discussed how astronomers know which craters are the oldest and which are the newest, and how the smooth places on the moon got that way. We had a lot of fun with this activity, and the kids wanted to stay long after the official end of the program, creating more and more meteor impact craters.

At the Watch the Sky! Party at the park, we did a variety of activities related to sky watching and the meteor shower. This program took place the day of the meteor shower. I partnered with the Parks and Recreation department to hold it at a park a little further away from city lights than my library branch. In spite of cool, windy weather, we created sky-watching journals, complete with a “stories of the constellations” page and spring sky map, and moon phase journal books similar to the one found here: http://static.nsta.org/extras/nexttime/MoonJournal.pdf . Upon completion, the template we used can be cut apart and stapled together as a flip book of the moon’s phases. We also had printed mini books for the kids to create for Earth Day.

While we were waiting for it to get dark enough to do a little sky watching, we played

Space Bingo with a set of picture cards so that even the youngest players could identify the space objects. We used gummies as both markers and prizes, so the game doubled as a snack! The plan had been to use gummies as prizes only, but it was windy enough that our bingo markers kept blowing away! We also had hot, fresh popcorn, courtesy of the Kenton County Parks and Rec popcorn machine, which had been brought along for the program.

By the time we finished Bingo, it was beginning to get dark enough to do some sky watching, but since the weather was cold and windy, not many wanted to stay much longer. Flyers for the event had reminded patrons to bring blankets or chairs for the sky watching, and the blankets came in handy for the warmth! We identified a few objects in the late-dusk sky, including Jupiter and several constellations. Using the Sky View Free app, (  https://itunes.apple.com/us/app/skyview-free-explore-the-universe/id413936865?mt=8  ) those in attendance were shown how to locate objects and find their names, given a brief tour of the app, and reminded to fill out their moon phase journals each night it is possible to see the moon in the next month. We searched for a few constellations (that it wasn’t really dark enough to see unaided yet), located the International Space Station in its orbit, and talked briefly about iridium flares and space junk. Since timing was such that the peak of the meteor shower would have been in the early hours of that morning, and since the weather was not cooperating, the Watch the Sky! Party ended before much actual sky watching could happen. Kids and adults went home armed with new tools for watching and documenting the night sky, however, and with a greater understanding of how to locate and watch for such things as meteors. Here are a few basic meteor-watching reminders… and don’t forget to watch the sky! 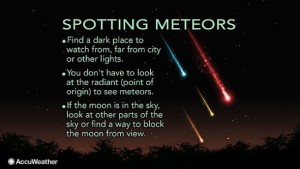