What is an Eclipse, Anyway? Create an Eclipse to Prepare for the Eclipse 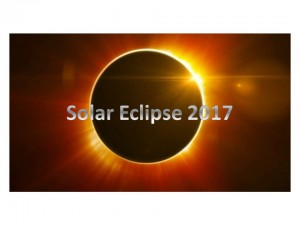 Like most everyone in the country, I’m getting ready for the eclipse.  The local science museum, about a mile away from my branch, will be hosting a viewing on the lawn on the day of the eclipse.  But me?… I’ll be driving wherever I have to go to see totality.  I have my glasses (the proper, safe ones), I have my guide books to the best places to go to get the best view, I’ve rented a car that’s in much better condition than mine, made my grocery list of snack foods to load into the rented car (some healthy, and some not so healthy), I’m checking weather forecasts daily for each of my top three locations, and I even got a solar eclipse telescope (how cool is that?).  I think I’m ready to go.

Before I head out of town, though, I’ll be doing a tween program to help the local kids prepare for the event of the year.  For the last several months, I’ve been wondering just how many people understand exactly what an eclipse is, and why there isn’t one every month, since the moon revolves around the Earth roughly 12-13 times a year.  I know that there are plenty of ways to try to explain it, but sometimes the best way to really understand a thing is to see it.  Being able to see it from several different angles would be even better.  But how can you possibly plan to see lots of eclipses, especially from different angles, in one lifetime?

Make a model, of course!  Especially a working, moving model 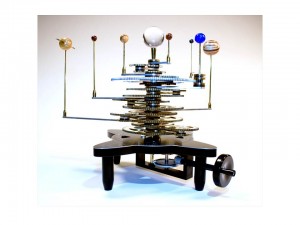 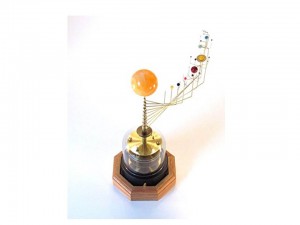 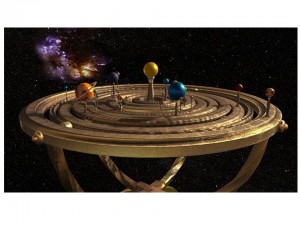 A moving model of part or all of the solar system in called an orrery (isn’t that a cool word?).  Before my program this weekend, I’ll be making a clockwork orrery from foam core.  I’ll leave the mechanics of the device as visible as possible, so that the participants can see how the gears and dowels work to make the sun, Earth, and moon move around one another.  That will allow me to mention the paper mechanics program that I’ll be doing during fall break.  But in the meantime, we can all enjoy watching a piece of the celestial dance as we watch the moon orbit the earth, and the Earth/moon system orbit the sun.  With the orrery, as well as a flashlight and balls, I’ll explain the difference between a solar eclipse and a lunar eclipse, as well as why they don’t occur more often.

Mine will not be nearly as elaborate as the ones above.  It will be much like the one that can be made from the pattern on the “Storm the Castle” website. 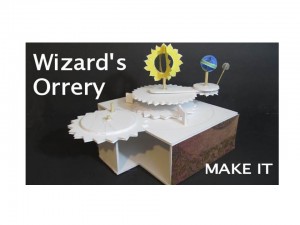 There’s an instructional video to help builders out.

In addition to demonstrating with the orrery, I’ll also take advantage of the wonderful resources available from a multitude of online sources to share various myths, folktales, and superstitions about the sun, moon, and eclipses.

Finally, each participant will get the opportunity to make a pinhole viewer to take home and use on Monday to watch the real show live.

Here’s a great site that shows you how to create your own simple orrery:

Here are online sources for information about solar eclipse myths and folklore: