Sometimes the best laid plans fail, and that can feel rough, but like my daughter says “mistakes help you learn!” and she is absolutely right. This was absolutely the case with my STEAM Engines (Skokie Public Library’s science club for K-2nd grade) program about spiders. The idea to learn about spiders was birthed from a rumor (stated as a fact) that I’d heard claiming spiders do not stick to their webs because their legs are coated in a kind of special spider oil. So excited was I about this notion, that I began to build a whole program around it. Things fell apart pretty fast when I discovered that, though I do enjoy the image, in fact spiders do n 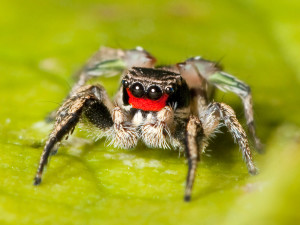 After doing a bunch of reading about spiders to get to the ACTUAL reasons they don’t stick to their own webs, I decided that they are amazing, and absolutely worth building a program around. The kids walked into the room to Caspar Babypants’ incredibly catchy rendition of Itsy Bitsy Spider (come for the tunes, stay for the hand puppetry!). A fetching picture of a friendly looking Jumping Spider was displayed on the screen with the words “you’ve got a friend in me!”

Once settled in, we read Sue Monks’ brilliant Aaaarrgghh! Spider! in which a lonely spider tries to prove its worth as a pet to a phobic family. Upon finishing, I surveyed the room: Who here likes spiders? Who is afraid of spiders? Who just plain doesn’t like them? The kids were pretty split, so I asked, “those of you who do not like them, WHY?” Mostly it came down to fear (of bites, of poison,  of creepy-crawling), and looks (scary!). Information gathered. We’ll come back to this. But first, some basic spider facts. I asked the kids whether they thought spiders were insects – they are not! After identifying some insect basics (3 body sections, 6 legs), we established that spiders are arachnids (2 body sections, 8 legs). We learned that though there are a few spiders w 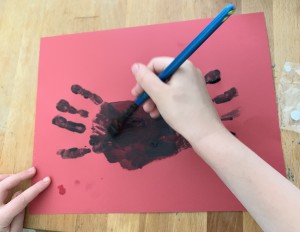 ith deadly bites, the vast majority of them are harmless to humans, and in fact, by trapping and eating other, more pesky bugs, they are actually pretty helpful. In fact, a typical spider eats up to 10% of its body weight in one day! We estimated approximately how much 10% of an average first grader would be, then used the opportunity to pass out hand weights, asking the kids to imagine how much food that would be. 6lbs of ice cream is intriguing. 6lbs of salad is intimidating.

We learned that though most spiders have 8 eyes, some have more, and some have fewer, though they are always in multiples of 2. We learned about the world’s biggest spider, the misnomered Goliath Birdeater Tarantula (they do not eat birds!), and the world’s smallest spider the Patu Digua. I stopped here and asked everyone how they were feeling about spiders now. There were some converts, but I didn’t have all of them…yet! The time had come to deploy my secret weapon: spiders wearing dewdrops as hats! And just in case, for some completely unfathomable reason, there were still  holdouts, I introduced them to Lucas the Spider.

By now, all the kids were feeling really excited about spiders. It was time to talk spiderwebs. As I prepped, it quickly became clear that webs alone could sustain a very robust program. Spiderwebs are very strong. By weight, they’re 5 times stronger than steel ( 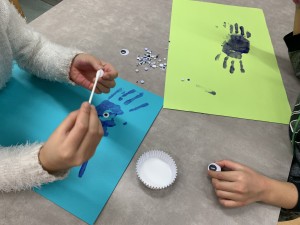 the kids were really impressed by this). They have a multitude of uses, from wrapping prey, protecting eggs, and building webs to traveling through the air. In the interest of time, I honed in on one aspect that I had read about that struck me as fascinating.

I asked the kids why THEY thought spiders didn’t stick to their own webs. Responses varied from their legs aren’t sticky, to one side of the web is sticky and the other isn’t, to the hairs on them keep them from sticking. All are sort of right! Focusing on the most familiar kind of web spinners, the orb weavers (think round webs with radial spokes), I revealed that the circular parts of the web are sticky – dotted with spider glue, and the s 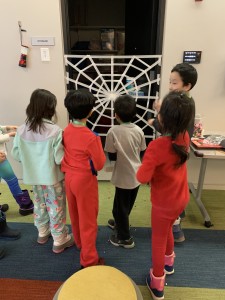 pokes are not. The hairs on the spiders legs DO help them to not stick as well, and it turns out that though it’s not exactly an oil, there IS a substance on the spiders’ legs that keep them from getting ensnared. Supple? You be the judge.

By now, the kids were getting wiggly, so I unveiled a web one of our amazing program assistants made from masking tape in our closet doorway. I had him construct the round wheel portions of the web facing the classroom, then facing the other way, connecting the radial spokes. I let the kids touch the web and think about ways the spider might move on it. Next, I brought out a bucket of puff balls and let them play insect in flight. The tape wasn’t quite sticky enough to really demonstrate how easy it is to ensnare a bug, but the kids really had fun trying. Finally we headed over to the craft room, where we made hand print spiders with accurate eye-counts, thankyouverymuch.

One pleasant surprise that made this program very successful was that one of the attendees is a serious arachnophile. He was thrilled about everything we were discussing, and his enthusiasm was infectious. The kids left excited about the spiders they’d made, filling their grownups in on spider facts. I was left feeling good, albeit with an ocean of puff balls to clean up.