This summer in the middle of Summer Reading Club, we acquired a grant-related exhibit for the library. Backyard Wilderness is a large-format film by HHMI studios, created primarily for the museum audience. An exhibit, designed also primarily for museums, was created to go along with it, and through the grant program, was distributed to libraries as well. When the exhibit arrived, it was packed in a couple of boxes and included a rolled-up rug. Once put together, the exhibit offered a conglomerate view of a “backyard” area, complete with large tree, and contained in the image were a number of kinds of wildlife for the viewer to identify. An additional, free-standing banner with the exhibit identified some typical backyard wildlife types for the viewer to locate in the images. The printed rug completed the immersion effect of the exhibit. Three “telescopes” on stands of differing levels pointed to things in the exhibit images to find, while looking into the scopes offered static images with a brief description of the image in each of the three. The idea of the exhibit, and the film, is to coach people, especially younger children, on how to observe carefully, and to find wildlife everywhere- even in their own backyards. The exhibit did not take up a lot of floor space- it was only 10 feet by 6 feet. Part way through the exhibit period, we moved the display from the Children’s department to the main lobby. We later moved it back to the Children’s department. Since the exhibit is constructed of printed cardboard panels adhered to a metal framework with velcro, moving it was actually fairly easy. 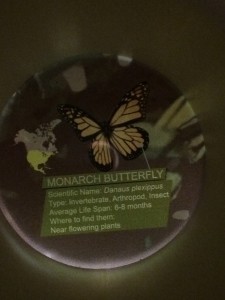 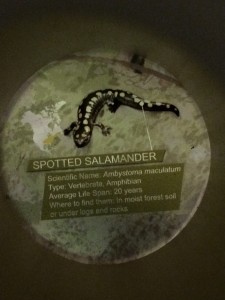 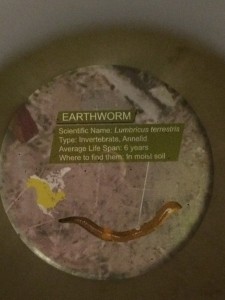 Kids and adults both enjoyed looking through the telescopes and searching the images to find the listed wildlife. 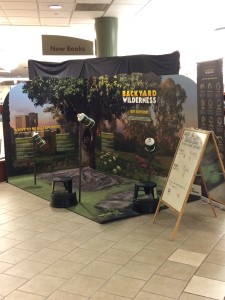 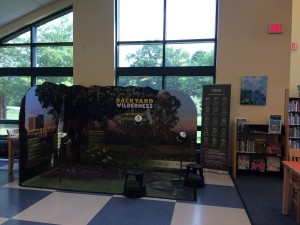 Besides the exhibit, the grant program called for the receiving libraries to host a BioBlitz program in conjunction with it, and included a program stipend to help cover costs. A BioBlitz is a program which, during a defined time period in a defined location, those attending try to locate and identify (using the iNaturalist app) as many biological species as possible. More info about BioBlitz in general may be found here. 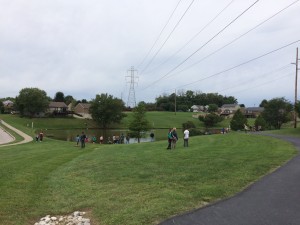 Our Bioblitz was held in a city park not too far from the library, in September. We had individual adults, families, teams of people, several Girl Scout Troops, and a fair number of volunteers from the community and Northern Kentucky University participate. We chose this particular park because it offers several different “bio zones” within which to work. We had a wooded trail, a mowed grass field, the edge of a pond, and unmowed vegetated areas, all within the boundaries of the park. We worked with the NKU Center for Environmental Ed, the Girl Scouts of Kentucky’s Wilderness Road Council, and the City of Erlanger to provide the BioBlitz experience. Our Backyard Wilderness BioBlitz was a very 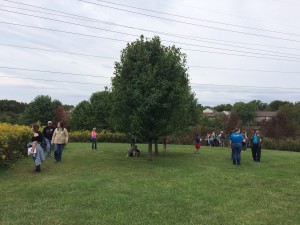 successful event, attended by a roughly 85 people from the community. It was a great collaboration. Clicking on the “Backyard Wilderness Bioblitz” link above will take you to the event page, with information about the location and the observations made during the event. By using the iNaturalist app, attendees take and submit photos of the species located during the event, which are then identified by the iNaturalist community. One of the great things about the timing of our BioBlitz is that the Girl Scouts just debuted new Journeys this fall called Citizen Science. It was an excellent fit for the Girl Scouts!

At the end of the BioBlitz, we recognized our volunteers, shared some of the different types of observations made, talked about using the iNaturalist app to identify wildlife elsewhere, and ate lunch together. It was a great event, in spite of the overcast weather! 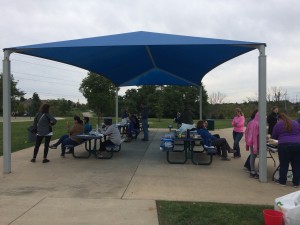