STEAM Engines: A House for a Louse

We were at the tail end of what seemed to be an endless, capricious winter. One of those predictably unpredictable Illinois seasons where one day you wake up and the sun is shining, and the breeze is sweet, and the crocuses know better but just can’t help themselves. There’s something about that optimism – that hubris – that I appreciate, and I felt similar feelings as I saw a lone ant making his way across our kitchen counter. I knew that soon we’d be locked in battle for control of the kitchen, but at that moment, about a month too soon for actual ant emergence, I respected his power move.

As I exerted my own power move (escorting him back outside on a piece of paper), my son wondered where he would go. This got me thinking about what happens to insects in the winter. It turns out, they go in a lot of different directions! The kindergarten through second grade kids of Skokie Library’s STEAM Engines club and I decided to celebrate (one of) winter’s (many) thaws by learning about what bugs do when it’s cold outside, and to welcome them into spring by making them their own little habitats. 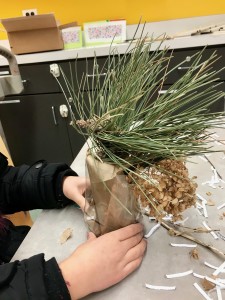 But first, we danced. As the kids entered the room and got settled, we boogied to Jerry Dalman & the Knightcaps’ topical hit “The Bug.” Once comfortably seated, we read Peter Stein’s whimiscal ode to insects Bugs Galore. It has a great rhyme scheme, and there’s a lot to look at in the joyful, crowded pictures. Afterwards the kids hypothesized about my slide title: “A House for a Louse.” They knew that a louse was somehow related to head lice, a foreboding but omnipresent threat in any K-2 classroom.

To the sound of scandalized gasps (lice…ewww!!), I asked them if they think that bugs sleep. The room was split. In fact, they do! Just like Skokie’s favorite lower elementary kids, insects need rest in order to be productive. Many actually sleep, but some enter a sleep-like state called torpor in which they relax by standing still, in a trance-like state. To illustrate this point, we talked about bee communication, specifically: the waggle dance. The waggle dance is how bees communicate, among other things, the location of nectar and pollen to their hive-mates. It’s specific and formal, and when a bee is overtired, much like humans, it gets sloppy.

So bugs need sleep, or at least concentrated rest. What happens to them in winter? Here, the kids did a really good job hypothesizing. One second grader remembered that they had learned about Monarch butterflies earlier in the year. He recalled, correctly, that they migrate! Others called out guesses: hibernation! They die! They hide out where it’s warm! All correct. Here we don’t have the luxury of time or long attention spans, but in a nutshell: Some spend their winters as nymphs, eggs, or larvae, nestled under cover of leaves or logs, or happily sleeping under ice.  The one thing they DIDN’T guess however, is that when it starts getting really cold out, some bugs produce a substance called glycerol – which is essentially antifreeze (and here we had fun thinking about bug cars). This allows them to survive in super cold weather. 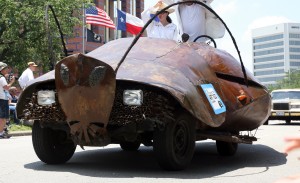 Feeling inspired, we moved to the craft room where I had assembled a plethora of leaves, bark, dried grass and flowers, pine 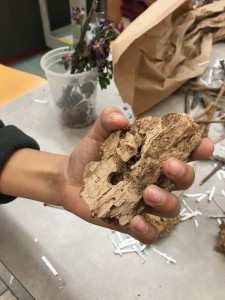 cones, shredded paper, and other biodegradable detritus. Using recyclables, the kids stuffed and arranged the detritus into bug habitats fit for royalty. Or at least a queen bee. Their creations were thoughtful and quite lovely, taking into account the insects that they had seen in their yards and where they might enjoy resting their antennae.

I loved this program – and I’m looking forward to dedicating a later STEAM Engines session exclusively to bees. So fascinating! But my favorite moment came later, as the program assistant and I were working on cleaning up what turned out to be a rather daunting amount of outside rubble, one of our young participants came racing back in the room. Ruddy cheeked and excited, he showed me his habitat up close: “Miss Caitlin! I got one! There’s a BUG in there!”
Lucky bug. 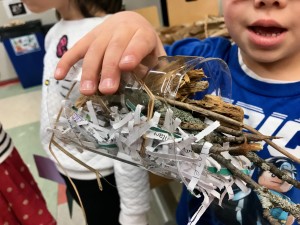