If you’ve attended a STAR Net webinar, workshop, or other training event, you may have heard our team talk about the importance of introducing your patrons to subject matter experts (SMEs), such as engineers, scientists, technicians, and more. SMEs can inspire your patrons and take the burden of “content knowledge” off of library staff. Patrons that do not often see themselves represented in STEAM fields may really appreciate and benefit from seeing subject matter experts that look like them or share a common background. If you have a STEAM program with young female patrons, for example, try highlighting a female subject matter expert 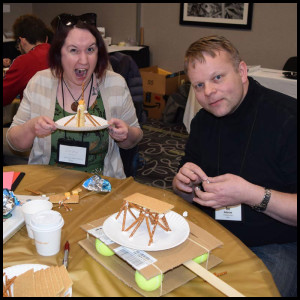 Kelsey Skrobis (left) of Anchorage Public Library and Tor Anderzen (right), a member of the Mat‐Su Branch of the American Society of Civil Engineers, team up for some fun STEAM learning!

In-person interactions with Subject Matter Experts (read more about STEAM collaboration opportunities here) can be very inspiring, but are not always possible. When an in-person SME interaction is not possible, we encourage you to consider showing your patrons photos and videos of Subject Matter Experts. Over the years, NASA missions and centers have produced many video profiles of scientists, engineers, and other employees sharing their stories. We have listed those videos below for use at your next library STEAM program!