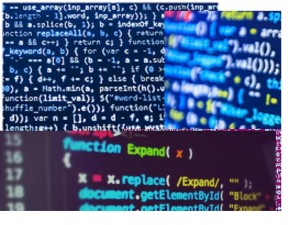 This year I started adding something new to some of my programs – coding.  It has been a whole new adventure for me.  When I was in school, computers in education were a new concept.  There was a room with several desktop computers with large towers connected to them.  Those computers required 6 inch floppy disks, were programmed with DOS, and sat there quietly in the dark most of the time.  I only had one teacher brave enough to try teaching with them.  Over the course of one semester, we learned some very basic programming, which I thought was fun, but which took up lots and lots, and lots of paper, since we wrote out our code for homework, and then tried to get it all typed in during class in the hopes of seeing something really cool happen on our computer green dot matrix monitors.  After that semester, the lights were turned off, the door closed, and the computers went back to sitting in the dark, untouched.

Last autumn, I happened to be within earshot when a news program on the tv ran a story about a library using robots in children’s and young adult programs.  I was intrigued, and began to explore the idea.  I was amazed and delighted with what I discovered.  There are all kinds of robots and tools available to help kids (and adults) learn to code and get past their fear of computers, while they play.

I decided to start with these cute little robots called Ozobots. 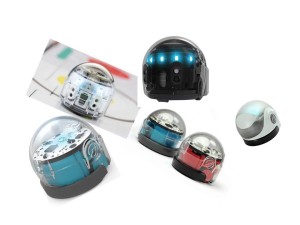 I chose them for a number of reasons.  Ozobots:

-can be programmed using computers, tablets, and phones

-can be programmed with colored markers for the youngest of participants

-use a Scratch-based language, which is easy for kids to learn

-have a large database of activities, programs, and games provided on their website

-are more affordable than some other options

-are loads of fun!

-can be dressed up all kinds of ways

-*very important* they are durable 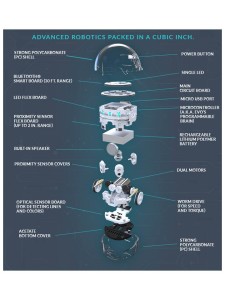 I started out by introducing them as an optional activity during Gadget Lab.  It worked beautifully!  Many kids were entranced from the beginning, and started doing the coding activities I designed for them.  Others started out on the tablets, as usual, but then gravitated over to the tables and joined in the fun by the end of the program.  A few stuck with the tablets, and that was just fine.  It is Gadget Lab, after all.

Using the markers at first to control them, instead of typing code or even “drag and drop” command blocks on a computer alleviated a lot of the anxiety that both children and their adults have when they are faced with dealing with a computer.  They learned the basics of computer coding without having to actually deal with a computer or tablet. We used water-based markers and ledger paper to begin our adventure with the tiny robots.  Ozobots recognize four colors: black, red, blue, and green.  When a path is drawn in blue, green, or red, the robot’s lights will turn the color of the path.  When the path is drawn in black, the lights are white.  The advantage to a black path is that colored codes can be drawn into a black path to give the Ozobot instructions telling it what to do.  There are quite a few “color codes” that will instruct the little bots to do all manner of things like turn a certain direction at the next intersection, go fast or slow or pause for a specified amount of time, zigzag, dance, etc.

Here’s a picture of the “Playground” that comes with the Ozobots: 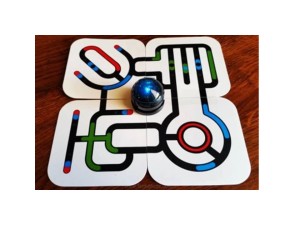 Here’s a picture of the command codes that can used with the robots: 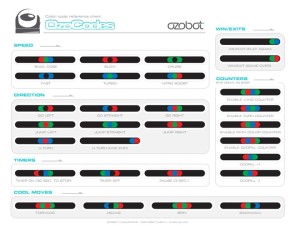 A series of sheets of instructions and challenge puzzles comes with the robots, including this sheet, and a sheet of removable stickers with the codes on them.  That makes it a lot easier to draw paths with commands for the bots to obey.  Another, different, set of challenges and more sticker sheets can be ordered, as well, if desired.  There are also puzzles and mazes that can be printed here.

Since they can be programmed with markers, I can still have a program with them even when I can’t get any wi-fi access in my program room, or when I don’t have access to the tablets because they are being used at another location.  Even better, younger children can quickly learn to draw the paths on paper and on a tablet, and play with the Bit and Evo bots.

Once confidence was boosted and computer anxiety overcome, then we could progress to commanding the Ozobots with a tablet.  By that time, people were excited to see what they could do using the tablets and the apps and games on the Ozobot Playground.  Rather than apprehension and hesitation, there was excitement!  Everyone has had a fantastic time playing with the Ozobots, and I rarely use the dreaded words “programming” or “coding.”  They’re learning without realizing that they are learning.  That’s the best way.