On Monday, we celebrated America’s birthday with some STEM activities! As always, we started with some reading,

and I intentionally chose books that included images of fireworks. I also included a number of non-fiction Independence Day titles in my book display, along with this title:

We started by reading A is for America, by Devin Scilian, then read Happy Birthday, America, by Mary Pope Osborne.

In keeping with the “rockets’ red glare,” theme, I decided to try two different activities, and both worked very well. The main activity was the creation of paper rockets which we launched with a stomp rocket launcher. The rocket templates we were

working with were designed by the Kentucky Science Center, but similar designs may be found here: http://www.instructables.com/id/Paper-Stomp-Rockets-Easy-and-Fun/ where there are also instructions for building your own launcher. We actually used launchers that I purchased. Many similar launchers are available online, such as on Amazon, here: https://www.amazon.com/s/ref=nb_sb_noss?url=search-alias%3Daps&field-keywords=stomp+rockets

The only materials required were the rocket part templates, scotch tape, and scissors. Markers or crayons to decorate the rockets are an option, but I chose to eliminate that step in the interest of time and the number of people expected in the program.

I pre-created some body tube forms for rolling and taping the rocket bodies around, to make the process simpler for the students. I made those in advance from card stock, with the initial tube formed over the launcher tube to make 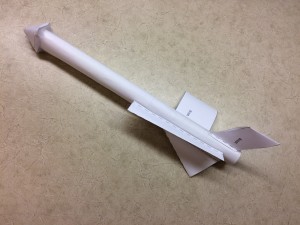 sure the size was appropriate for the rockets to fit the launcher. Additional forms were made from my original, so they did vary in size slightly from one to another. The only important part of the forms is that they are similar enough in size that they will fit the launching tube relatively snugly. Using card stock that was somewhat slick on one side meant that the rocket bodies, once formed and taped closed, were easier to slide off the forms. The rocket templates we were working 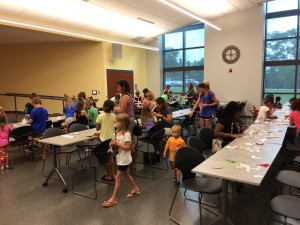 with include a body, a nose cone, and four different styles of wings. I offered all of them to the students, suggesting that they choose at least 3 wings, either all the same, or different styles, and experiment with the various wing shapes. I made a model of the rocket with one of each wing style, just so students (and adults!) could see optimal orientation of the wings when attached to the rocket body. I suggested further that the scientific way to approach the wing shapes was to use one wing shape, fly it, choose a different wing style, and test it again. Comparing how the different wing styles affected the flight (or lack of it) for the rocket is one way to practice the scientific method of hypothesis, testing, and conclusion. With the amount of time (and number of kids) we had, however, most simply chose a wing style and then spent time actually flying the rocket. 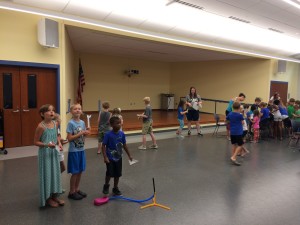 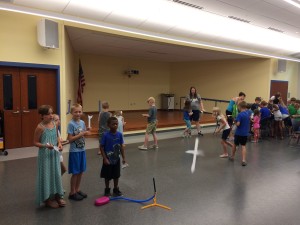 The second activity I offered was an origami popper or “firecracker” which we created from newspaper. This was actually the more labor-intensive of the two activities for me, as many of the kids needed individual help in understanding the folding instructions. I did have one copy of the printed instructions available, and not all the kids chose to try this activity. Those who did, however, enjoyed the finished product, once they figured out how to make it work! Instructions for the popper can be found here, http://www.origami-instructions.com/origami-popper.html including a video at the end that demonstrates what the popper does. They make a surprisingly loud noise, somewhat similar to the fireworks poppers you throw on the ground to produce a bang. The original instructions I found for this called for newspaper, but there were two drawbacks to using it. One, I had newsprint all over my hands after the program, and two the finished poppers were perhaps not as reliable in producing noise as they might have been. The main advantage to using newspaper was that we were recycling! The issue many encountered with making the poppers work was figuring out where and how to hold them so that they could pop open and produce the sound when flicked downward sharply. Watching the video, including the slow-motion section, helps to make that part clear.

Celebrating the 4th of July can be a STEM event- with paper engineering, and practicing the scientific method-and it was a whole lot of fun! Even little brothers got in on the stomping fun when their program ended and they joined the bigger kids with us! 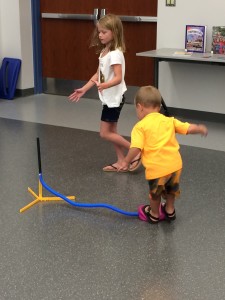