Summer Reading programs in the park have begun again for the year. So how to inform and entertain a variety of ages, in an outdoor setting? Animals!

The theme for the second week was animals, and the first of the Tuesday/Thursday programs featured a live animal petting zoo. Well over 250 people showed up for that! 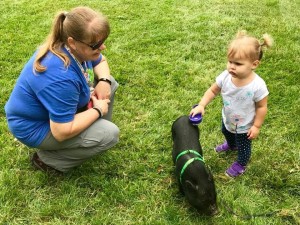 We had two baby goats, two young sheep, a little pot-bellied pig, and a rabbit, all of whom seemed to actually enjoy the attention. Sunrock Farm, a local educational farm (https://www.sunrockfarm.org/), hand-raises the animals destined for both in-farm and outreach education, and they are used to crowding, not-always-so-gentle, noisy children. In our case, they also hardly even flinched when the trains 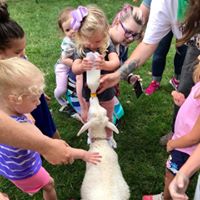 went past the depot, whistles and all. With the chaos of the park/animals, the fact th 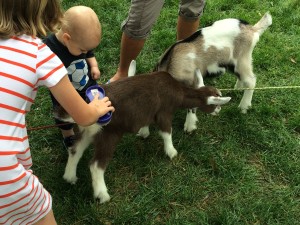 at a new fence was being built on the property, serving lunch, the trains, the playground… I didn’t even try to read any books for this program. There were a couple of families, however, that missed it- and if we do the same thing next year, I will definitely go ahead and do the reading too. The petting zoo was a huge hit, and even without any additional program, the employee who brought the animals made it an informally educational program. Those attending learned about the animals as well as getting to pet, brush, and feed them.

So how to follow up two days later without live baby goats? First we made sure that all of our PR mentioned that there would NOT be live animals on Thursday. We learned that lesson the previous year, when PR was not clear on that fact, and we had a number of disappointed people at our animals program when we didn’t actually have live animals at the program.  As anticipated, there was a somewhat smaller crowd. We did begin with reading; first, the book Flying Frogs and Walking Fish: Leaping Lemurs, Tumbling Toads, Jet-Propelled Jellyfish, and More Surprising Ways That Animals Move, by Steve Jenkins and Robin Paige. This beautifully illustrated and fun non-fiction book talks about the unusual and unexpected ways some animals get from one place to another. It is an absorbing look at animal locomotion… some of the kids even left their picnic tables to sit on the ground to better see the book while I read.

Next, we read the beautifully written and illustrated new title Hawk Rising, by Maria Gianferrari, illustrated by 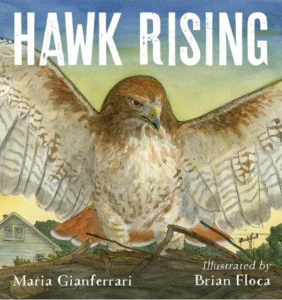 Brian Floca. I had the privilege of working with Curious City DPW to help create the activity and hawk-watching tips to go with this amazing book. The activities can be located here: http://www.curiouscitydpw.com/2018/06/07/hawk-rising-activities/ Hawk Rising also allowed us the opportunity to talk about how some animals are herbivores, some are carnivores, and some, like most people, are omnivores. We talked about what it would be like to have to wait most of the day for our food and to have to chase it down in order to eat. There were actually some very insightful questions and comments related to the way hawks hunt their food while we were discussing this book.

That lead us directly into our third title for the day, Terrific Tongues! also by Maria Gianferrari, and illustrated by Jia Liu. Since I generally read the stories while everyone is eating lunch at this program, animal tongues was a great topic! I started by asking everyone to stick out their tongues, and hilarity ensued! Kids and adults alike were very entertained and intrigued by the story, guessing out loud from one animal to the next to which each tongue belonged.

Following the stories, we played animal bingo, then moved on to making frog masks with bug-zapping tongues. The

acitivity, also created by Curious City DPW, can be found 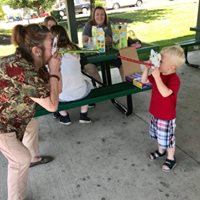 here: http://www.curiouscitydpw.com/2018/04/10/terrific-tongues-frog-mask-with-terrific-tongue/ The kids and some adults had a great time creating their frog masks! We had party blowers in a variety of colors available for them to choose from, so our frogs had some very colorful tongues. As a bonus, we held a drawing for two copies of the book. Both families who won were super excited about their new additions to their personal libraries! (The mom of one of the winners told me her son insisted on reading the book in the car on the way home, and had already memorized it by this week!) 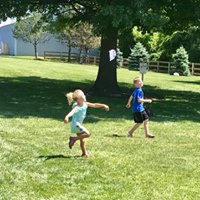 o complete the day’s activities, we shared the glider activity for Hawk Rising. We saved this for the end, since many of the kids attending were preschoolers and early elementary age. We were not sure how well they were going to be able to follow verbal folding instructions for the gliders, even though I also provided copies of the illustrated printed instructions. Many of the youngest ones simply asked me to fold

theirs, then enjoyed gliding them around the park. As a bonus, a hawk was spotted flying near the park about the time the program was ending, meaning we actually got to practice some hawk watching! There was also a buzzard flying in the same general area, which afforded us the opportunity to compare attributes of the flying hawk and buzzard. We were able to compare wing and body shapes, colors, flying habits, and more. It was a terrific way to end the program!