Have you ever noticed that the older you get; the more time seems to fly? When you were four years old, desperately waiting for your family vacation, it seemed like it would never come. And once you got there, it seemed like you were there for almost forever. Now, the wait for that same trip may seem like there’s not enough time to even pack, and once you’re there, it’s over in an instant.

In everyday life, this phenomenon is just a matter of perception. The older you are, the more time you’ve experienced, so if feels like you’re accelerating through life faster and faster the older you get. A young child by contrast doesn’t have as much experience to compare the passage of time to, so the countdown to important events appears to take (literally) forever.

What if this phenomenon wasn’t just a matter of perception? What if certain people really did live life more quickly? Or others more slowly? Those questions aren’t a matter of science fiction, they describe a phenomena known as “Time Dilation”, which was first described by Albert Einstein. Time Dilation can happen in 2 different situations: 1) Individuals traveling at significantly different velocity to one another, or 2) due to large gravitational forces (like near a black hole).

Both of the above situations have a measurable (although tiny) effect on astronauts on the International Space Station (ISS), but in opposite directions! The time dilation due to relative velocity means that the astronauts on the ISS are aging just slightly slower than the rest of us. The longer they stay up there, the bigger the difference is (this can be measured by very precise clocks like the one at NIST). Time dilation due to gravitational forces actually causes the opposite effect, as the astronauts are experiencing less gravity than on Earth. They should experience their time passing faster than their counterparts at home, but their relative velocity has a greater influence than the lower gravity at ISS altitude, so the net is a slight slowing of time. (Around 1/1000 of a second over 6 months.)

What if the astronauts on the ISS were flying even faster (maybe even approaching the speed of light), or were experiencing even more (or less) gravity?

This is where things start to get weird.

If our astronauts were to fly much faster than current technology allows for 10 years and then come back to Earth, their family at home may have experienced 100 years. If they travel even faster, Earth may not even be there when they get back. The unfortunate result of time dilation is that our intrepid explorers can visit perhaps the entire known universe in one lifetime, but have no one left to share that knowledge with. Science Fiction? For now, absolutely, but it’s theoretically possible.

Is it possible to get even weirder? Of course it is! Let’s now imagine that our astronauts decided to investigate a black hole (which is frankly a terrible idea). The closer they get to it, the stronger the gravitational force exerted on them. This means that an outside observer (perhaps using a super strong telescope back here on Earth, away from the black hole’s influence), would see the clocks on our astronauts’ ship moving slower and slower the closer they get to the Event Horizon, or the Point of No Return, of the black hole. Eventually, it would appear that our ship gets “stuck” at the event horizon, and never really goes in. It would just appear to get smaller and smaller, dimmer and dimmer, over ages and ages.

And our crew? They don’t even notice exactly where the event horizon is. Because the gravitational forces are acting on them, only we notice the slowing of time. Time to them seems to pass the same on their ship. Though, if they could look back at us, they’d notice that we inexplicably sped up.

What happens once they pass the Event Horizon? Popular science fiction would tell us that a black hole may be a portal to another dimension, or a wormhole to a different part of the universe. For all we know, this could be science fact! What we do know, to quote Stephen Hawking, is “Black Holes ain’t so black.” While they may gobble up everything that gets close to them, the old idea that nothing comes back out isn’t necessarily true. Black holes emit radiation, likely the particle remnants of items that passed the Event Horizon. This radiation either implies that matter doesn’t pass the Event Horizon whole (our poor astronauts), or it just tells us that something unfathomable is happening on the other side!

Moral of the Time Dilation story? Just like our example with a child eagerly awaiting a trip, it’s clear that the passage of time is entirely dependent on the observer. And two observers witnessing the same event can still experience things differently, depending on relative velocity and proximity to huge gravitational forces. Perspective is everything.

Let’s look at the passage of time from the perspective of the Universe. It’s been around for a long time.

The Universe began almost 14 billion years in a cataclysmic explosion called the Big Bang. This was the beginning of both space and time as we know it. That’s billion, with a “B”. By contrast, the Earth and our sun have been around for a little over 4.5 billion years. The first single-celled organisms showed up on Earth 3.5 billion years ago. And land plants? Just a mere 700 million years ago. Dinosaurs took their time, showing up 231 million years ago. The oldest fossils of Homo sapiens (that would be us), are only 200,00 years old.

What is the Universe’s equivalent to a four-year-old thinking Christmas will never come? If we could have been there when the Universe came in with a bang (you know, the Big One), it would have seemed so empty for the first little while. It wasn’t until a few minutes in to the infancy of the universe that sub-atomic particles like protons and neutrons started to combine into nuclei. But as long as that would have seemed had we been born with the Universe, it took more than 150 million years for stars to start forming.

How can one grasp time from the perspective of the Universe? Carl Sagan approached this question by condensing the entire life of the Universe down to 1 single year. So the Big Bang happened on January 1, and we’re currently hanging out on December 31st at midnight. The first galaxies would have begun to form around January 22nd. It’s not until the 16th of March that our galaxy, the Milky Way, forms. And our Sun and our planets? Not until early September. That means we’re ¾ of the way through the life of the Universe before the Sun even turns on.

Let’s move to Earth now, following the same timeline. The first water dwelling life-forms probably showed up around the end of September. Our atmosphere wasn’t breathable until the end of October. Multicellular organism finally joined the party on December 5th. The first insects got around to evolving around December 21st. We had a great present on Christmas, dinosaurs showed up! The next 3 days saw the arrival of mammals, birds, and flowers (that’s right, the first dinosaurs never saw a flower!) And the last dinosaur didn’t see the asteroid heading for Earth until December 30th, at around 6am.

We’ve made it all the way to December 30th, and still no sign of humans. Apes finally arrive on the morning of New Year’s Eve. Primitive humans, like those who painted in caves in France, they don’t show up until 10:24 pm that night. We’re less than 2 hours from the New Year, and our primitive ancestors are doodling on cave walls. We don’t see humans walking upright until 8 minutes until the ball drops, at 11:52. We don’t start plowing fields until 28 seconds before the clock strikes 12.

28 seconds left in the history of the universe, and we’re just getting to taming wheat. The wheel appears with 11 seconds to go (that’s right, in the game of ‘what came first, the wheel or the plow?’ the plow wins). The Roman Empire rose and fell with 5 seconds left in the year, and Christopher Columbus got lost on his way to India with 2 seconds to go.

It’s not until the last second, of the last day, of the last month in the year that we tame electricity, create computers, put a man on the moon, and have the capacity to fathom Black Holes.

If the Universe was capable of being an observer of its own history. It could easily miss all of modern science by blinking an eye. It would miss all of humanity by turning its head at a strange sound. If it took a catnap, it might miss the earliest proto-humans scratching at walls and learning to walk upright.

Instead of feeling insignificant looking at this timeline, we should feel extremely lucky that we’re living in a technological age where we can understand the vastness of time, and contemplate the enormity of space. 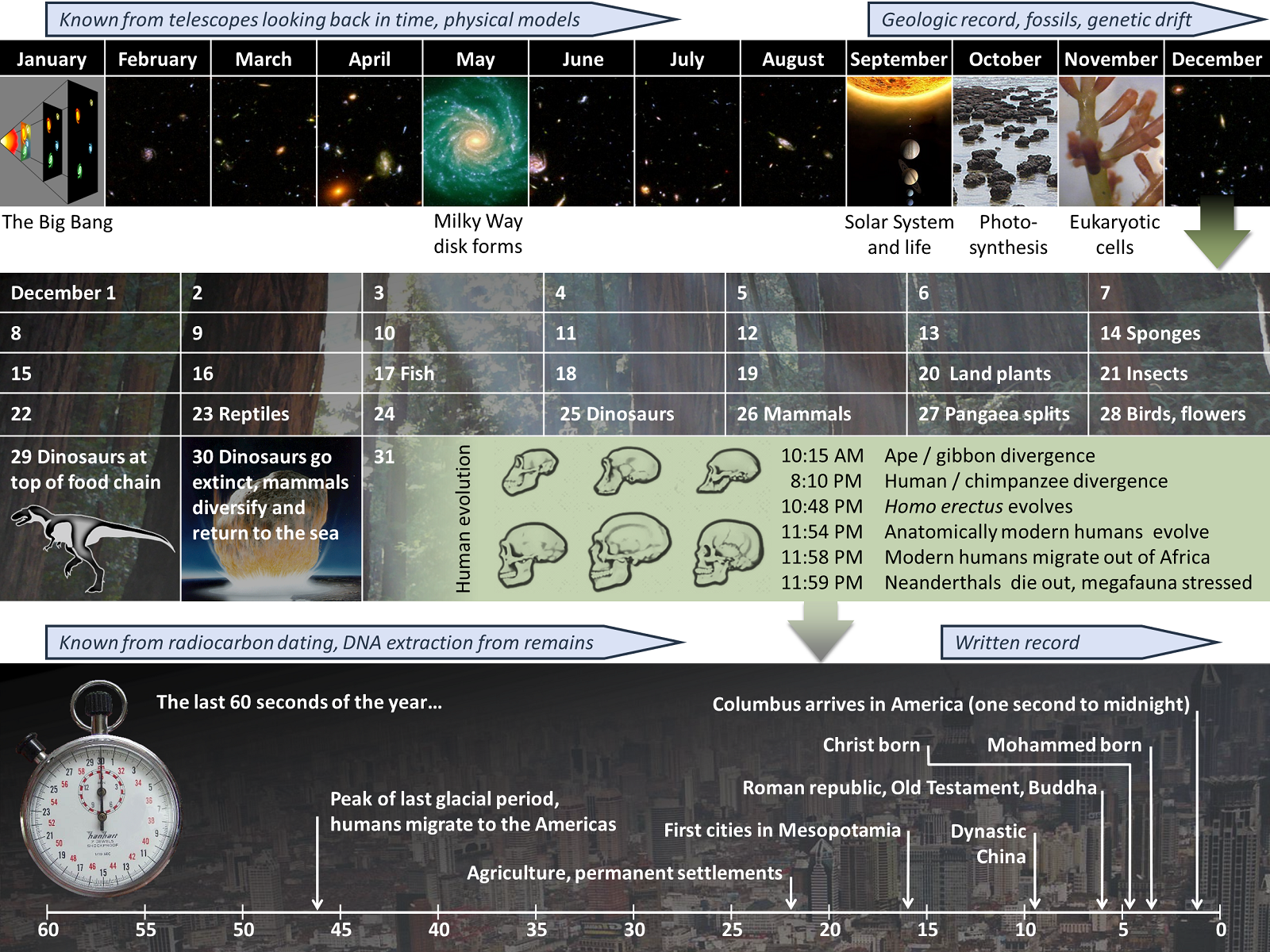 To learn more (from the people who helped me understand it all) check out:

A Brief History of Time by Stephen Hawking

Cosmos (I prefer the Carl Sagan version, but Neil deGrasse Tyson does a great job as well)

The Emperor’s New Mind: Concerning Computers, Minds and the Laws of Physics by Roger Penrose

The Universe in a Nutshell by Stephen Hawking